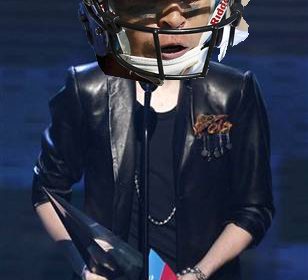 The NUmbers Guy, Jim Sannes (@JimSannes), recaps the highs and lows of the year in Wildcat athletics. Good evening, ladies and gentlemen, children and Ron Artest/Metta World Peace/Indiana Ron/Eliminated, and welcome to the First Annual NUmby Awards. What’s a NUmby, you ask? Great question! It’s like I told you to ask that! A NUmby is a horrible attempt at an award name by yours truly that will be used to “honor” the greatest accomplishments and moments this year in Northwestern athletics. If you have any objections or would just like to verbally assault me for not picking Stefan Demos as Male Athlete of the Year (his greatness transcends the boundaries of graduation and eligibility), feel free to tweet them @JimSannes. Now, without further ado, your NUmby winners.

This one was essentially a no-brainer. Shurna lit up every opponent in his path on his way to breaking three Northwestern records: points (2,038), games played (130), and blocks (136). That’s a decent resumé, I suppose. This season, Shurna averaged 20.0 points per game and also led the team in rebounds (178) and blocks (55) on his way to a first team all-Big Ten selection. Although Shurna’s team didn’t make it to the NCAA tournament, that can’t be held against him, as it should be clear by this point that they have been cursed with an inability to catch that round, orange thing after it bounces off of the shiny, reflective surface.

The junior defensive stud for the ‘Cats takes the cake for this award because watching her run is more enjoyable than, well, cake. Considering I’m a member of the “doughy physique” gang, that’s saying a lot. Thornton won the American Lacrosse Conference Player of the Year award and is one of five finalists for the Tewaaraton Award as the best women’s college lacrosse player in the nation. She got the year started right by scoring only 32 seconds into their season-opening match with Stanford and never looked back. Thornton’s coast-to-coast sprints make Jackie Chan in Around the World in 80 Days look embarrassingly slow, but, let’s be honest, that movie didn’t need her help to be an embarrassment. While we don’t know yet the final fate of the 2012 women’s lacrosse squad because I’m lame and write my end-of-the-year columns before the end of the year, it’s safe to say that this team was the most successful of all Wildcat teams, and a lot of that success is due to Thornton. When you’re the best defender on the second-stingiest team in the nation, I think that some “props” are in order.

Best Moment of the Year: Northwestern football’s upset of Nebraska.

Nebraska’s entrance to the Big Ten seemed like a scene out of Step Brothers. “Oh, hey. We’re Nebraska, and we’re here to “mess stuff” up.” Instead, their first year has been more like the scene where the bunk bed collapses on top of Will Ferrell.. The ‘Cats topped the ‘Huskers both times they played in men’s basketball, two out of three times in baseball, once in women’s basketball while Nebraska was a top-20 team, and once in volleyball when the ‘Huskers were ranked second in the nation. DO YOU SEE WHAT YOU GET WHEN YOU MESS WITH THE WILDCATS??? This all started with Northwestern’s 28-25 victory in Lincoln. I can’t count the number of times I have woken up with a giant, Dennis Quaid-esque smile on my face thinking about Kain Colter’s 81-yard touchdown pass to Jeremy Ebert to put the ‘Cats up by 11 in the fourth quarter. Let me pause just a moment to regain my composure… I get a little too excited thinking about this game. YOWZA, MOMMA CITA!!!! I’m good now.

Most #ThatsSoNorthwestern Moment of the Year: Either the Illinois football game or the loss to Minnesota in the Big Ten basketball tournament.

The case for the 38-35 loss to Illinois: The ‘Cats were coming off of a frustrating 21-14 loss to Army followed by a bye-week. It was the opening of the Big Ten schedule and the return of Dan Persa. The ‘Cats had a 28-10 lead late in the third quarter. Then the poop hit the fan. Mike Trumpy suffered a knee injury and was lost for the season, and the combination of Nate Scheelhaase and A.J. Jenkins stabbed the Wildcats in the heart with a harpoon bigger than my desire to rub James Harden’s beard. Jenkins exploded, recording 12 catches for 268 yards and three touchdowns, single-handedly improving his draft stock a round or two (you’re welcome, big guy). It was the start of a four-game losing streak to start the conference season, and the start of my search for a basin in which to drown my tears.

The case for the 75-68 overtime loss to Minnesota: SEVENTY-FOUR YEARS, PEOPLE!!! SEVENTY-FOUR FREAKING YEARS!!!!! The team probably would have needed to beat Michigan in the next round, also, to have a shot at making the tournament, but this loss to the Golden Gophers was one of those that could make Northwestern President Morton Schapiro wish he were an Iowa Hawkeye fan (Yeah, I went there. COME AT ME). It was their seventh loss either in overtime or by less than five points on the season. It also got me in trouble with PETA after I threatened to tase a gopher. Things just plain got out of hand. This paragraph has made me realize that I shouldn’t write these columns when I’ve consumed copious amounts of caffeine.

Best End to the Season: Softball. Without a doubt.

On May 4th, the team was 21-27 with almost no hope of making an NCAA regional. They proceeded to rattle off six straight wins against Michigan State and Illinois, earning them a birth in the Austin, Texas, regional. But, whooooooooa, Nelly, the ‘Cats didn’t stop there. They won the first two games, one against the eighth-ranked Texas Longhorns and the other against Houston, launching the winning streak to eight games and sending my head into a tizzy. Even though they ended up losing both games to Texas on Sunday, which spelled their elimination, the run the ‘Cats made to end the season was something that we don’t get to see very often. This team used a combination of great offense, even better team chemistry and momentum to catapult into the post-season, and they made a lot of Northwestern fans very proud, myself included. Since I’m on the verge of tears for the second time in 1,000 words, I need to move on and talk about manly things. Don Draper. Professional wrestling. Steak.

So, folks there you have it. Thank you all for joining us for the first annual NUmby Awards. I would copyright that phrase, but I’m fairly certain no sane person would ever want to use it. Also, thank you for joining us here on WNUR Sports every Wednesday since January for the NUmbers Guy, as this is the last one of the year. We will be back, however in the fall for the start of the football season… sorry in advance. Thank you all for reading, and I look forward to sharing this space with y’all lovely people again soon. Until then, though, here’s this to keep you occupied.