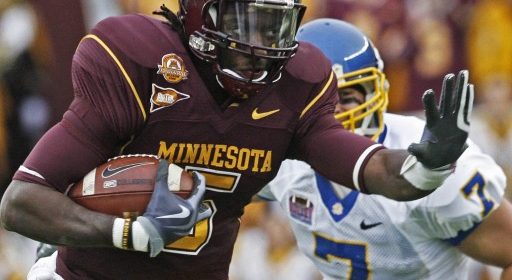 Looking at the numbers of the 2011 Minnesota Golden Gophers season is not something for the faint of heart. Hide your kids, hide your wife, and hide your calculators because Jerry Kill’s first season in the Twin Cities was a struggle to say the least. But, in the words of Kanye, that that don’t kill me can only make me stronger. I could totally see Kill bumpin’ to some Yeezy, so let’s take a look at what happened last year and then show why Gophers fans have reason for optimism in the future.

I mean, it could be worse, right? Well, when you consider one of those losses was to North Dakota State and another a 58-0 loss to Michigan, maybe not. That said, only four of their nine losses were by twenty or more points, and three were by less than a touchdown. Does that count as looking at the bright side?

This was three points per game lower than the second worst Big Ten team, Indiana, and better than only nine teams in all of the FBS. Points were harder to come by than fans of the show Sister, Sister (even though it’s secretly the greatest television program ever). Luckily, the defense was better than the offense… just not by much. They allowed 31.7 points per game, the 93rd most in the country. But, hey, they beat Illinois and Iowa, so we should be friends.

The running game is going to be the key to Minnesota’s success in 2012. As Kill gets his own recruiting classes into Minnesota, expect them to fit the ground-and-pound mold that Kill used so well at Northern Illinois. The only problem with this number is that almost half of the yards, 966, came from quarterback MarQueis Gray. Hey, at least he didn’t lead them in receiving, too… that team would be in serious trouble (looks nervously at Kain Colter’s stats from 2011…). The team’s top tail-back, Duane Bennett, averaged only 3.8 yards per carry. Bennett has graduated, leaving the Gophers looking for a player to step in and fill a position that will play an integral part in Kill’s game plan.

6: Number of returning offensive starters for the Gophers.

Overall, the Gophers will be an extremely young team this year, especially up front. Of the five projected starters for the offensive line, there is one junior, three sophomores, and one freshman. The junior, Ed Olson, is entering his third year as a starter at left tackle, and he will be asked to lead this unit. However, he might not even be the best member of the big uglies from his own household. Ed’s brother, Tommy, was the top-rated prospect in the state of Minnesota out of high school and made several starts as a true freshman in 2011. As long as they don’t go all Kurt and Kyle Busch on each other, the two of them will form a solid base for the line. Having Ed return at left tackle and giving Tommy and the rest of the young gang a year to mature can only lead to good things for the running game and for Gray as a passer in 2012.

42.1: Percentage of Minnesota’s receiving yards recorded by Da’Jon McKnight in 2011.

The Gophers will be losing McKnight, one of the best receivers in the conference last year, who led the Gophers in receiving yards (760) and touchdowns (4). Their top returner, Brandon Green, had more than 25 receiving yards only twice last year and never had more than two receptions in a game. The two receivers that most people are talking about, Marcus Jones and Devin Crawford-Tufts, are both sophomores who averaged more than 15 yards per catch last year. Jones, a 5’8” speedster who was recruited as a cornerback out of high school, has big play capabilities and could stretch the field for the running game. Crawford-Tufts was the number five prospect in Minnesota in the 2010 graduating class and has more size (6’2”) than Jones to provide Gray with a bigger target to throw at. Once again, this is another young unit that has some big shoes to fill for the Gopher offense.

5: Number of returning starters on the defense.

The team is losing both of its starting defensive tackles and safeties, so there will be a lot of turnover on this side of the ball, as well. One of the returners, Troy Stoudermire, promises to have a big impact on the field. Stoudermire was granted a fifth season of eligibility after missing the final eight games of last year due to a broken arm, yet he still led the team in interceptions with two. Stoudermire already owns the Big Ten’s all-time record for kick return yards with 3,102 and is only 415 yards short of tying the NCAA record. Stoudermire’s absence certainly hurt a defense that finished 88th in sacks (19) and 116th in interceptions (4). Change on a defense that struggled so mightily is never a bad thing, and when you add back a playmaker like Stoudermire, there’s no reason to think that this team will get any worse than it was last year.

I realize this team didn’t look like a potential five-win team throughout most of 2011, but if their last four games were any indication of the future, things are looking up in Dinkytown. Three of their non-conference games, UNLV (sorry, Adonis), New Hampshire, and Western Michigan, should be wins which would mean they would only have to go 2-6 in conference play to get to five wins. Jerry Kill turned Southern Illinois and Northern Illinois into ten-win teams within the first three years of arriving on their respective campuses, so there’s no reason to believe that the Gophers won’t see significant improvement, also. Once Kill is able to get guys that fit his system into the program, the Gophers could eventually return to contention in the Big Ten Legends Division.