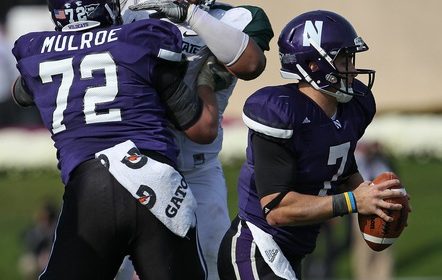 Throughout the years, I’ve been told that consistency is a good thing. However, consistent is not one of the first 1851 adjectives I would use to describe the Northwestern offensive line of last year. In several games, they looked like one of the top lines in the conference. In others, they looked dazed and confused. If the ‘Cats want to go back to their fifth consecutive bowl game, they will need consistent production from the guys up front.

3: The number of returning starters on the offensive line.

Left tackle Al Netter and right guard Ben Burkett have both graduated, leaving two of the most important spots open on the offensive line. There has been talk about moving Patrick Ward from right to left tackle to replace Netter, but Ward’s pass blocking has been below average the last few years due to a laundry list of leg injuries. Two new starters will have to jump in and replace Netter and Burkett, who, despite having somewhat disappointing senior years, were still productive players while at Northwestern.

66: The number of starts between the returners Ward, Brian Mulroe, and Brandon Vitable.

Both Ward and Mulroe are entering their third year as starters, meaning the mental side of the offense should come easily to them. Mulroe was named an honorable mention All-Big Ten selection last season at left guard, but it’s the guy who his right who is garnering the most national attention. Vitabile, a redshirt sophomore, was named to the Rimington Trophy Watch List for the 2012 season, ranking him alongside the best centers in the nation. Last year, Vitabile impressed the coaching staff so much that they moved three-year starter at center Burkett to right guard to fit Vitabile into the starting five. If that doesn’t tell you how great this guy is and how highly the coaching staff thinks of him, then just check out the tape of last year. That should do the trick. The only question is whether or not the experience of the three returners will be enough to make up for the lack of that same trait at the other two spots.

42: The number of sacks the ‘Cats allowed last season.

This was the fifth highest total in the nation, and when there are 119 teams in the Football Bowl Subdivision, that is, in the words of Sir Charles, crazy, knuckle-headed tuurrible. Although the ‘Cats have great depth at quarterback, it’s probably not a good thing if they’re getting knocked around the entire season in the backfield. As much as I would love to see it, the offense might not fare well with Bo Cisek behind center. In games the ‘Cats allowed two or fewer sacks, they were 6-0. In games they allowed three or more, they were 0-7. Outside of the games against Penn State, Michigan State, and Texas A&M, the Wildcats allowed 2.33 sacks per game, which is certainly passable. They just need to find a way to eliminate the lapses in order to give Colter time to find Christian Jones, Cam Dickerson, and Tony Jones downfield.

226.5: Rushing yards per game recorded by Northwestern in their six wins last season.

When you compare this to the 115.3 yards per game they averaged in their seven losses, it seems pretty obvious that the running game is huge for this team. While the rushing yards per game should increase automatically with the use of Colter at quarterback, the return of Mike Trumpy after a knee injury, and the increased use of Venric Mark in the option, the offensive line will need to amp up their consistency if Northwestern wants to dominate on the ground. Vitabile’s presence in the middle will be important, but the tackles and guards will need to have enough speed to get to the linebackers on outside rushing plays. The Wildcats averaged only 3.8 yards per carry last year, which ranked 87th in the nation. If they can find a way to get that average up to 4.3 yards per carry, that will only make Colter and the receivers more effective on play action.

Overall, the offensive line may be the biggest question mark heading into this season. While they are certainly experienced with the returners, the performance last year indicated that something was missing. It will be interesting to see if Fitzgerald and company decide to redshirt Jack Konopka, a tackle-turned-tight-end-turned-guard, who some say has the potential to reach the NFL some day. Regardless of what happens with Konopka and the rest of the hopeful starters, one thing is certain: when September 1st rolls around, it will be the offensive line, more than any other unit on the team, that determines the fate of the 2012 Northwestern Wildcats.