Posted on August 8, 2012 by WNUR Sports Leave a comment 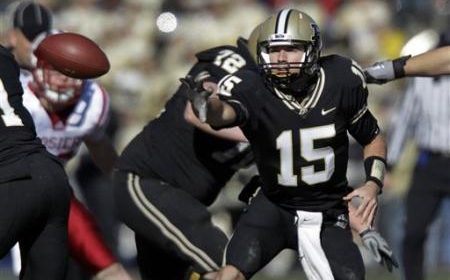 WNUR Sports Director Zach Kisfalusi (@zKisfalusi) previews the Purdue Boilermakers and tells why they could give the Wisconsin Badgers a run for the Leaders Division title.

Sanctions and suspensions are two of the key words when discussing the Leaders Division of the Big Ten this year. With Penn State and Ohio State ineligible to play in the second annual Big Ten Championship Game, many have handed the bid to Wisconsin without much contest, but there is another team that must be given a chance.

The Purdue Boilermakers are the underdog to win the division. Purdue, however, does have a favorable start and finish to their schedule. The Boilermakers play Eastern Kentucky and Eastern Michigan in a three-week span that is only separated by a trip to in-state rival Notre Dame. Their final non-conference game is against Marshall at Rose-Ade Stadium. With three home games against non-BCS opponents and a road game against a rival, it is very conceivable that the Boilermakers start the season 3-1 under Coach Danny Hope.

Michigan, Ohio State, and Wisconsin are the next opponents. History and wisdom says Purdue will be lucky to win one, yet if contention for the division is the goal then this stretch will be very telling of this team.

The stretch run must be where the Boilermakers win their games and make a second consecutive bowl game. With games against Minnesota, Illinois, and Indiana, not to mention the troubled Penn State, Purdue can close the season with a  bang and make the race for the Leaders a lot closer than most believe.

If this is all going to happen, Purdue will have to play excellent defense lead by potential All-Americans Ricardo Allen (CB) and Kawann Short (DT). Short is a tackling machine in the run game and a quarterback’s nightmare in the 3-technique disrupting the passing game up the middle of the offensive line. A projected first round draft pick in the 2013 NFL Draft, Short has battled injuries during his collegiate career and must stay on the field to help the Boilermakers. Allen is a true shut down corner and a great player to have in the secondary against the passing attack.

The concern for the Boilermakers is the offense. How will they score points, especially with the graduation of strong-legged kicker Carson Wiggs? At running back, Purdue has many questions with Ralph Bolden coming off a knee surgery, Akeem Shavers unable to pick up a blitz, and Akeem Hunt unable to take the physical style of a Big Ten running game. Even with this committee approach, Purdue looks to have a solid running game that is aided by an agile quarterback.

The question is who starts at quarterback? Is it Robert Marve, Caleb TerBush or Rob Henry? Each has started numerous games for the Boilermakers, but no one has emerged as the favorite so far through off-season training. Rob Henry is arguably the best athlete on the team and has been rumored to get snaps at both running back and wide receiver opposite Antavian Edison. Henry will get snaps behind center in running situations or with one of the others in the backfield with him to create confusion. Marve and TerBush, both seniors, will receive equal time to start the season until one emerges as the starter.

Until this happens, the Boilermakers could lack synchronicity and timing on offense. Marve has the big arm, but TerBush helped lead the team last year to a bowl victory. This battle is the one to watch throughout the season. Purdue is a 7-5 team but with some luck and improved, they could pose a threat to the Badgers to win the Leaders Division this season.