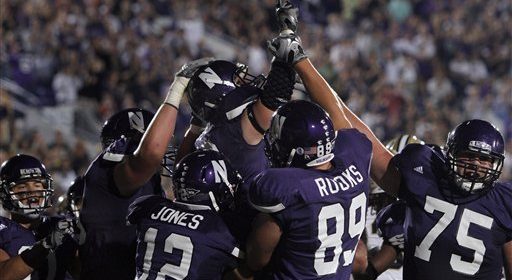 On Saturday morning (or early afternoon depending where you are), Northwestern will kick off its 125th season of varsity football against the Syracuse Orange in the Carrier Dome.  It is the third consecutive year that NU opens on the road against a BCS-school that is probably better in the classroom than it is on the football field (see Boston College and Vanderbilt).  The ‘Cats will be vying for a seventh straight season-opening winning, a streak which dates back to the beginning of the Pat Fitzgerald-era in 2006.

Saturday’s game will be the third installment of a four game series that will run through next season.  The two schools split the first two meetings in 2008 and 2009, with the home team prevailing in each. In 2008, Northwestern opened their season with a 30-10 victory over the Orange, thanks to big days from CJ Bacher, Tyrell Sutton and Brendan Smith.  However, Syracuse was able to avenge that loss the following season by defeating Northwestern 37-34 on a last second field goal.  In the all-time series, Syracuse holds a slim 5-4 lead, which incudes a 3-0 record at the Carrier Dome.

Syracuse got off to a promising start in 2011, as they won five of their first seven games, including a 49-23 blowout win over eventual Big East Champ West Virginia, to put themselves in position to reach a second consecutive bowl game.  However, Syracuse fell apart at the end of the season, losing their final five games by a combined score of 155-81, to finish at 5-7 and out of the postseason.  In the end, the 2011 season was a huge step back for a Syracuse program that went 8-5 in 2010.  As a result, the Orange should have a huge chip on their shoulder in 2012.

On offense, Syracuse is led by senior QB Ryan Nassib, who set school records in passing yards (2,685), completions (259) and TDs (22) a year ago.  He is joined by a deep group of receivers, which includes All-Big East performer Alec Lemon, and a solid offensive line that returns three starters from last year’s team.  With the strong-armed Nassib, there is no doubt that Syracuse will try to take advantage of an inexperienced Northwestern secondary.  In fact, the game may be decided by how effectively NU slows down the Syracuse passing game.  On the ground, Syracuse is much more inexperienced, as they do not return any players who rushed for more than 150 yards in 2011.  Like Northwestern, they will employ a number of different ball carriers on Saturday.  On paper, Syracuse is a fairly solid offense that could pose some problems for Northwestern’s defense.  However, injuries could severely limit the Orange’s productivity as starting left tackle Justin Pugh, and WRs Alec Lemon and David Stevens are all considered to be questionable for the game.

The Syracuse defense is a little stronger than the offense, as they return eight starters from a defense that was pretty average last season.  They are not particularly strong in any one area, but they do return significant contributors at all three levels of the defense.  One player to watch out for is strong safety Shamarko Thomas, who is considered to be one of the hardest hitters in the Big East.  All in all, Northwestern should be able to put up points on this Syracuse defense.  Last year, Syracuse had a particularly hard time with dual-faceted quarterbacks.  Therefore, expect QB Kain Colter to have a strong game, both as a passer and as a runner.  Syracuse also had a propensity to give up big-plays, so guys like Venric Mark, Tony Jones and Kyle Prater will the have the chance to make a big impact on Saturday.

Prediction:  Northwestern 31, Syracuse 23.  Northwestern will be tested on Saturday by a fairly experienced Syracuse team, and will face particular challenges in slowing down the arm of QB Ryan Nassib, and controlling the crowd noise of a potentially hostile Carrier dome.   However, Northwestern’s talent, especially on offense, should allow them to outscore Syracuse in a game that will see a good amount of points from both squads.  Expect this one to go down to the wire, before Northwestern is ultimately able to seal the win.