Posted on September 3, 2012 by Jim Sannes Leave a comment 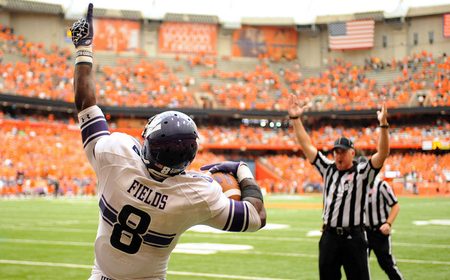 WNUR Sports Direcor Jim Sannes (@JimSannes) breaks down Northwestern’s 42-41 victory over the Syracuse Orange by giving the Three Up/Three Down for the ‘Cats. The fact that I am still fully functioning and able to write this column may go down in history as one of the most unpredictable medical marvels of all time. The ups and downs of Saturday’s 42-41 victory over the Syracuse Orange put the hearts of Wildcat fans through a clothes dryer that was on a roller coaster attached to a galloping stampede of wildebeest that would make Mufasa pretend he never saw Simba stroll into the gorge and leave him behind. That doesn’t make sense, but I’m okay with it. Speaking of ups and downs, let’s take a look at the three good things to come out of Saturday’s game and the three WE’RE-ALL-GOING-TO-DIE stats that could define the 2012 Northwestern Wildcats.

Mark, the junior running back/punt returner/kick returner/playmaker/new love interest, led the team in rushing with 82 yards on 14 attempts, recorded 49 kick-off return yards, scored on a 21-yard reception on a deliciously-run wheel route, and amassed 134 punt return yards, including an 82-yard touchdown return to give the ‘Cats a 7-6 lead near the end of the first quarter. That’s bromance material right there. Many were surprised to see Mark listed at the top of the running back depth chart at the beginning of the week, but the diminutive 5’8” tailback from Texas came up huge on the field, shifting the momentum of the game into Northwestern’s favor several times. Me likey.

+2: Turnover margin for the Wildcats.

While the offense only averaged 4.7 yards per play in the game compared to Syracuse’s 6.3, the ‘Cats were able to avoid crippling mistakes for the entire game. The lone turnover came on a fumble by Kain Colter when he was crushed on a blitz by a Syracuse defender. Neither Colter nor Trevor Siemian threw a pick in 32 pass attempts, and the running backs held onto the ball. If the defense continues to play like it did Saturday, Northwestern will have to win in this category every week if they want to sniff a bowl appearance. The defense was opportunistic with its turnovers. Chi Chi Ariguzo’s interception after a crushing hit by Quinn Evans and fumble recovery and subsequent touchdown after a Ryan Nassib backwards pass both gave me a chance to scream, “GO, CHI CHI!!!!” which is far too satisfying. This is the stat that can keep teams in games regardless of how well or how poorly their defense is playing.

This was one of the big concerns with the offense heading into the season. The losses of Jeremy Ebert and Drake Dunsmore figured to affect the ‘Cats most on third down and in the red zone. While they were only five for 14 on third down conversions, they were able to get six points on each trip to the red zone. Once Kyle Prater is able to fully assimilate to the spread offense, his size will be huge for the Wildcats in this situation, but Northwestern found success even without much from Prater.

470: Passing yards by Nassib in the game.

Same song, different verse. Northwestern’s secondary still can’t stop the pass to save their lives. This number doesn’t even include the four pass interference penalties which would bring the total to 530 yards. Nassib last season threw for 2,685 yards. He is currently on pace to throw for 5,640 yards this season. It’s not fair to call out the entire secondary, though, as it appeared as though both Nick VanHoose and Ibraheim Campbell played very well, but this is an area that must be addressed or I will end up naked in a corn field begging the football Gods for forgiveness. I seem to end up threatening nudity in a lot of these columns. What does that say about me?

5: Number of sacks allowed by the Northwestern offensive line.

Last season, the ‘Cats were 0-7 in games they allowed three or more sacks, so at least they bucked that trend on Saturday. Jack Konopka and Chuck Porcelli struggled at the beginning of the game on the right side, but they seemed to pick up their performance as the game went along. You aren’t going to win many games when the offensive line gives up five sacks (am I right, Bears fans?), and you’re also going to get your quarterback killed. No bueno. Don’t be surprised to see the ‘Cats go with more three-receiver sets, including a superback on the line to try to add extra protection against the rush. If not, #HurriKain could go to #HurriPain.

Nothing is more deflating for a defense than forcing a third down and being forced to stay on the field after the offense is able to convert. Well, unless Taylor Lautner announces he won’t be in the remaining Twilight movies, which is far more deflating… ain’t nobody want that. A lot of the blame for this goes to the pass rush, which, after a strong start, slowed tremendously in the second half. The ‘Cats only recorded one sack in the entire game. The easy answer is to blitz more often, but then you end up putting the cornerbacks in 1-on-1 situations outside which was u-g-l-y on Saturday. Tyler Scott recorded five tackles and a sack, but the rest of the defensive line combined for six tackles, including only one by the other starting defensive end, Quentin Williams. Is this a reason for concern? Do I enjoy listening to Lil Jon while playing with rubber duckies in a bubble bath? The answer to both of these is an emphatic, “YEEEEEAH!”

Next up for the ‘Cats is Vanderbilt. The positive is that Northwestern is 1-0 and on pace to go 14-0 and win the BCS Championship (#RoseBowlOrBust). The negative is that Vandy’s passing game looked good against an excellent #9 South Carolina defense last week in a 17-13 loss.  To combat the rampant pessimism, I will leave you with this image because the fine folks at WNUR made the mistake of allowing me to post my own articles. vs. Rutgers on Mixlr

vs. Michigan on Mixlr.

vs. Penn State on Mixlr.