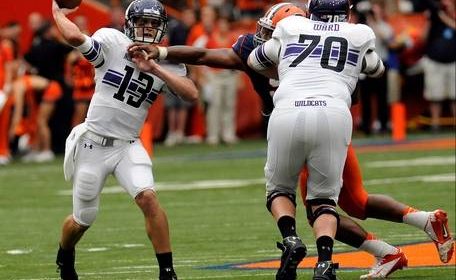 WNUR Sports Director Jim Sannes (@JimSannes) investigates the Northwestern quarterback conundrum between Kain Colter and Trevor Siemian. Both Colter and Siemian played well in Week 1 against Syracuse, so why did Northwestern head coach Pat Fitzgerald decide to forego Colter in favor of Siemian on the final drive? Fitzgerald addressed the decision in a teleconference with the Big Ten on Tuesday, leading to even more questions about the use of the two talented signal callers. This segment will air during the WNUR Kick-Off show on Saturday, with the pre-game show opening at 6:00 pm from the Lakeside Studios and opening kick at 7:00 from Ryan Field with Danny Moran (@DannyJMoran) and John Castellanos (@JJCast15) on the call.