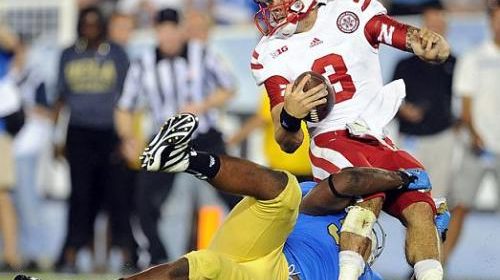 WNUR Sportsathon Co-Director Greg Mroz (@TheeMrClean) takes us on another magical journey through the Big Ten, breaking down a week that was, in the words of Greg’s favorite rapper, dysfunctional.

Volume 3: We Out Here Tryin To (Dis)Function Before Saturday, I had this great idea for what this week’s column would look like. My favorite rapper E-40 has just come out with a hit song called “Function” which is essentially a rap about what it takes for certain people to function. Yet, after what happened this weekend, the only thing that can really describe the Big Ten is total and utter dysfunction. Actually, a total embarrassment might be a more accurate descriptor of what happened to the Big Ten this weekend. When you break it down and really look at it, here is what I mean.

I have lived in the Bay Area my entire life, and having been exposed to Pac 12 football since I was little, I can tell you one thing. Pac 12 football is an inferior and weaker brand of pigskin compared to what is played everywhere else in the country. That is why what happened to Nebraska, Illinois, and Wisconsin is without a doubt the epitome of dysfunction. The Fighting Illini were without starting quarterback Nathan Scheelhaase, but against an Arizona State team who was predicted by many to finish last in the Pac 12 South, you should be able to win with your backup QB and a strong running game. Well, what Illinois once again showed is than when under some pressure, their offense folds up its tent. The passing game gained a grand total of 101 yards in the game. 101! I think any other team’s punter could’ve thrown for that against a Pac 12 defense. Illinois can run the ball, but what they showed against ASU is that their offense is in total dysfunction. It also doesn’t help that the Illini gave up more than 500 yards in total offense to the Sun Devils. Illinois is in for a long season if they play like they did in the desert.

Now Nebraska was a team that people thought might lose at the Rose Bowl to UCLA, and as it turned out, they did. The absence of Rex Burkhead didn’t make much of a difference, but UCLA had over 650 yards of total offense against the Cornhuskers. That is a number that would have the ghosts of linebackers past rolling over in their graves. I thought the Big Ten was supposed to be a conference built on power offense and solid defense. Nebraska proved the previous statement to be a total lie. Also, memo to Bo Pellini. Taylor Martinez is not a good thrower! While I am a strong believer in the power of a good running game, which Nebraska has, you need to be able to throw the ball in order to win. Nebraska in the air is the epitome of dysfunction.

Yet, the king of dysfunction in week 2 is none other than the team that has made the Rose Bowl the past two years, the Wisconsin Badgers. The losses of Illinois and Nebraska saddened me because I love the Big Ten, but what Wisconsin did on Saturday just made me laugh. They lost to Oregon State, who was predicted by most to finish last not just in their division, but in the entire Pac 12 as a whole! The Badgers were anemic on offense, and Danny O’Brien is proving that he is no Russell Wilson or Scott Tolzien. Its just embarrassing that a team like the Badgers could play as bad as they did. Yet, I am not sad to see this. It’s about time that Bret Bilema and his program start to suffer. Karma is a (female dog), and Bilema’s teams have run up the score on teams for years. I find it hard to pick against Wisconsin to win the Big Ten, but the loss at Oregon State is proof that they are human, or maybe even less than human.

So the Big Ten went 0-3 against the Pac 12, but the lack of function doesn’t stop there. Iowa lost to Iowa State in a game that was like the Cancan, nothing but kicks! A 9-6 loss to their in state rival is proof that the Hawkeyes miss what Marcus Coker and Marvin McNutt gave to their offense. James Vandenberg is not a big time quarterback, and more to the point the running game was awful, averaging just 2.4 yards per carry. The Hawkeyes offense is dysfunctional.

Penn State lost to Virginia, not exactly something to scoff at because UVA is pretty good and Penn State as a whole can’t function. Purdue put up a good fight against Notre Dame but couldn’t come up with the W. The Boilermakers are a team though that did function on Saturday, as they were also the only Big Ten team to face a ranked opponent last week. Michigan almost lost to Air Force, further establishing the Wolverines as the Big Ten’s most overrated team. The most functional team in the Big Ten last week was Northwestern, who fought hard on defense, giving up only 13 points to Vanderbilt and putting together two great drives to win the game. Michigan State, Minnesota, Indiana, and Ohio State all took care of business easily.

The Big Ten did not function on Saturday, that’s the bottom line. Could this be a weak year for the Big Ten? I sure hope not, but if the conference performs on a consistent basis like it did on Saturday, then one BCS bid is all this conference is going to get. If you want some really functionality, blast some E-40 in your car and he will tell you how to Function.