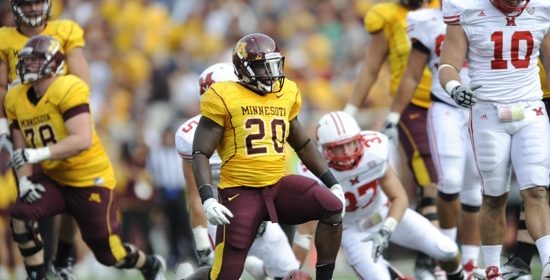 WNUR Co-Sportsathon Director Greg Mroz (@TheeMrClean) takes a look at the Big Ten Conference, including a preview of a possible battle of two surprise undefeateds. Volume 5: No Church in The Wild

In this year’s Big Ten, nobody can achieve salvation. It isn’t like anyone committed a crime, but nobody is really that good. That we have determined. Yet, Big Ten play is starting up, which means that what happened in the non conference season is but only a measuring stick used against the rest of college football. Conference play will be what separates the best from the worst in conference, and for that alone, teams are now entering a wilderness that is unpredictable, just like this season.

Minnesota and Northwestern are each 4-0, and each start conference play with a winnable game. The Gophers face Iowa, who was upset by Central Michigan last week 32-31. The Gophers haven’t played strong competition, but if they beat Iowa, you will know they are for real. As for Northwestern, the Cats take on perennial doormat Indiana, so expect NU to be 5-0 when the week is over. What is even more surprising is that Minnesota and Northwestern have a chance to play against each other as unbeatens if each wins their next two games. But one of them will leave that game with a loss. No loser can gain salvation after that game.

Ohio State and Michigan State square off in East Lansing, but what’s clear is that Ohio State is good and Michigan State is not. OSU may not be bowl eligible, but Braxton Miller is sure fun to watch! He can do it all, unlike Sparty, who can barely beat Eastern Michigan. There truly is no church in the wild for MSU, as if they play like they have been on offense, it could be a very long and brutal season in East Lansing.

Wisconsin plays Nebraska, a battle many before the season thought would be a marquee one, yet it’s a battle of two teams who do the exact same thing: run the football, run the football, and then run it some more. Neither of these teams inspires much to be hopeful in, but somebody has to win the game, which is what many people should be saying. You can’t pick Wisconsin to win after how they’ve been playing, and Nebraska has not been great on defense. Edge has to go to the Badgers though, because they continue to find ways to win.

Illinois and Penn State are awful, but Penn State we knew was going to be awful. We didn’t know how bad the Illini were. Their only wins have come against Western Michigan and Charleston Southern, who are not good teams. Illinois can beat Penn State, but nobody else will be taking any mercy on Illinois. This could be the worst Illini team in a long time.

It’s a weak Big Ten. Let these teams show no mercy and may the best compete to be the best of college football’s most overrated conference.