Posted on September 29, 2012 by WNUR Sports Leave a comment 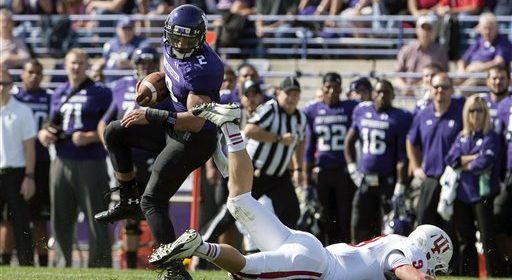 The Northwestern Wildcats improved to 5-0 Saturday as they held on to defeat the Indiana Hoosiers 44-29 despite allowing 29 points in the second half.

The ‘Cats got out to a 27-0 lead early in the third quarter after heading into the half up 20-0. The Hoosiers were able to cut the lead to eight with 14 minutes left in the fourth, but Kain Colter’s fourth rushing touchdown of the game secured the win for Northwestern. Colter set career highs in rushing yards (161), receptions (9) and receiving yards (131). Colter’s four rushing touchdowns tied a school record, becoming the sixth Wildcat to achieve the feat.

Colter got the start at receiver for the first time this season as Trevor Siemian started for the first time in his career at quarterback. Siemian completed 22 of 32 passes for 308 yards, but threw no touchdowns and one interception. Colter only threw three passes, one of which was intercepted, with only one completion.

The ‘Cats set a school record with 704 yards of offense, eclipsing the previous record of 674 yards set against Wisconsin in 2005. The ground game was dominant, totaling 394 yards, 101 more yards than their previous high this season (293 versus South Dakota).

A pair of eight-yard rushing touchdowns for Colter in the first half coupled with two Jeff Budzien field goals gave the ‘Cats a 20-0 lead at the half. Northwestern came out of the locker room and quickly added seven more points on a 15-yard run by Colter to make it 27-0.

Indiana started their comeback with consecutive touchdowns on a 20-yard run by Stephen Houston and a 35-yard pass from Nate Sudfeld to Kofi Hughes to cut the lead to 13 points.

After a Venric Mark touchdown from one yard out, Tevin Coleman returned the ensuing kick-off 96 yards to make it a 34-21 Northwestern lead.

Northwestern answered the long touchdown with a long drive to gain some momentum back. A nine-play, 69-yard drive resulted in Budzien’s third field goal of the game to extend the Wildcat lead to 16 points. Budzien has made all 12 field goal attempts this season.

The Hoosiers countered Budzien’s field goal with a 69-yard drive of their own resulting in a 2-yard touchdown run by D’Angelo Roberts. A successful reverse to Hughes on the two-point conversion attempt brought the Hoosiers within eight before Colter’s touchdown closed the door.

Mark finished the day with a career-high 139 yards on 29 attempts. Mike Trumpy added 87 yards on the ground, averaging 6.2 yards per carry.

Northwestern redshirt sophomore safety Ibraheim Campbell left the game in the third quarter with an undisclosed injury and did not return.

The Wildcats will be back in action next Saturday in Happy Valley to take on the Penn State Nittany Lions. The WNUR Sports Kick-Off show will begin at 10:00 am with opening kick at 11:00 am as the ‘C‘ts look to improve to 6-0.