Posted on October 20, 2012 by WNUR Sports Leave a comment 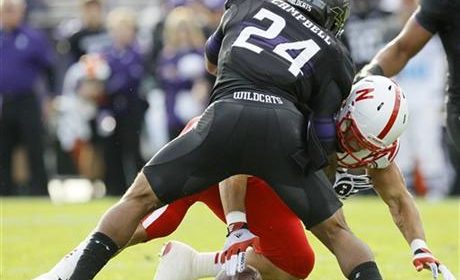 WNUR’s Drew D’Alelio recaps the Northwestern Wildcats’ 29-28 defeat at the hands of the Nebraska Cornhuskers as the ‘Cats fell to 6-2 on the season. Northwestern fell just short of moving to 7-1 (3-1) today after a tough, yet predictable loss to the Nebraska Cornhuskers, with a final score of 29-28. Being up twelve points with 8:31 left in the fourth quarter wasn’t enough for the Cats, as Nebraska QB Taylor Martinez came through in the clutch, throwing two touchdown passes in the last six minutes.

The inability of the Wildcats to maintain a lead in the fourth quarter continues to pose problems when they competing against more competitive programs. This game looked all too similar to the Cats loss to Penn State two weeks ago, in which they were up eleven, and gave up 22 fourth quarter points to lose by eleven.

Despite three first-half Nebraska turnovers, including two muffed punts, two Taylor Martinez passes that could have easily been intercepted, and home field advantage, the Cats couldn’t get it done.

Although he threw for two touchdowns, Trevor Siemian was disappointing, finishing with a line of 15-35, and 116 yards. Venric Mark produced another 100+ yard game, which included an 80 yard run early in the 3rd quarter, but left with an injury, and was unable to carry the offense aside from the big play.  Kain Colter was practically invisible, despite torching the Nebraska defense last year, finishing 1-2 passing, 14 carries for 35 yards, and 3 receptions for 17 yards.

“Go Big Red” chants were louder than “Go U Northwestern” chants. Huskers fans were in abundance in every section of the stadium aside from the student section. During the Wildcats’ last drive, it seemed that the Nebraska fan base was so loud that the coaches were struggling to communicate with the men in the huddle.

Northwestern’s offense, defense, and coaching staff all deserve some blame for the loss.

Although the offense put up 28 points, out of 17 possessions, ten were three –and-outs, and twelve were punts. Trevor Siemian often missed open wide receivers, and failed to execute when it meant the most at the end of the game. Colter didn’t do his part, and Mark didn’t do his, aside from his 80 yard run.

The defense had a lot to cheer about heading into halftime, and even into the third quarter; however, they couldn’t maintain their swagger for 60 minutes.

Taylor Martinez torched the secondary in the fourth quarter, and converted multiple deep completions when the pressure was high. Losing CB Nick Vanhoose to injury certainly didn’t do the Cats D any favors, either.

Although the offense and defense will likely receive most of the blame for the loss, it is worth noting that a couple decisions made by Pat Fitzgerald and co. contributed to the outcome. Kain Colter played exceptionally well last year when Northwestern took down Nebraska, but was used sparingly. On the final drive, Siemian led the Cats all the way down to the Huskers 40 with a minute and a half left to play, and all timeouts remaining. The Cats decided to call three shotgun passes in a row, which resulted in a near interception, a short completion, and an incompletion. Lastly, although kicker Jeff Budzien was 11 for 11 on field goals until today, he has not been counted on in the past to make a 50+ yard kick, especially in a high-pressure situation. Calling a timeout and weighing the options in that situation would have made sense.

All in all, this was a devastating loss for Northwestern. They proved once again incapable of finishing in the fourth quarter. The same questions that have loomed this season and in past seasons will not die out as Northwestern continues the tougher half of its schedule. The chances of the Cats making an appearance in Pasadena are now slim to none.

Next up, the Iowa Hawkeyes.