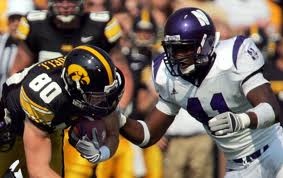 The ‘Cats are 6-2, JA Adande is the Homecoming Grand Marshall and the first round of midterms are coming to an end. Needless to say the spirits in Evanston are running rather high. Well if your good spirits are in full swing right now, I recommend that you stop reading this article. Of the teams the Cats have beaten, only one currently has a winning record (Minnesota is 4-3 after starting 4-0) and those six teams have a combined 14-28 record. The two games they have lost have come to teams with a combined 10-4 record (Penn State and Nebraska) with the team blowing double digit 4th quarter leads in both games.

Think about that. The ‘Cats could be 8-0 going into this Homecoming game.

But as it stands now, they are not and they have serious problems to tend to. Cornerbacks Nick Vanhoose (RS-FR) and Quinn Evans (SR) have been ruled out of Saturday’s game against the Iowa Hawkeyes. This is troubling because not only does it make the already thin secondary thinner, it will almost undoubtedly give struggling senior QB James Vandenburg confidence to throw the ball down the field.

But the Wildcats defense isn’t going to be the only concern come game time. The offense has been less than stellar recently. In the last 9 quarter, Northwestern’s offense has only put the ball in the end zone 7 times and of those 7 touchdown drives, only 2 have been 60+ yards, one of which was the 4 play, 93 yard drive ending in an 80 yard Venric Mark touchdown run. The passing game has struggled mightily, evidenced by Trevor Siemian’s 15-35 116 yard performance last week.

The offense has struggled so much that the most prolific play the unit offers, the Colter-Mark option, has been neutralized by opponents. Kain Colter even admitted this week that the offense has “lost its identity.”

The team is going to need to find their identity if they want any hope of going into the bye week and the ensuing back-to-back home games in The Mitten. A good way to do that is give the ball to the 10th leading rusher in the NCAA. Yes, in the country! Venric Mark’s 910 rushing yards are 10th in the country (I will never tire of saying that) and his 6.1 yards per carry and 9 touchdowns through 8 games are not too shabby either.

While getting Mark going early with be necessary, Coach Fitzgerald needs to get one of his quarterbacks going early, and stick with him. Switching the two QB’s out situationally is simply making the team too predictable. And that should not be too hard against this Iowa defense that is tied for the 2nd fewest sacks in the Big Ten.

There is a lot riding on this game for Northwestern. With a win, they still conceivably have a chance to make the Big Ten championship games, and will have 7 wins before November for the first time since the 1996 season, the season after the ‘Cats played in the Rose Bowl. Not saying they will be Rose Bowl bound if they win this game, or am I… Yes. Yes I am. Book it. Right now.

The Cats need to overcome injuries and find an offensive identity to pull out the win. Unfortunately, it will be too much to overcome. With much regret, I am picking Iowa to walk out of Ryan Field on Saturday with a 24-17 victory over Northwestern. Nevertheless, I will be cheering for my team the whole way, begging them to prove me wrong as they so often do.