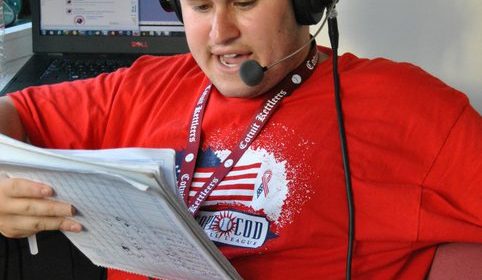 WNUR Sportsathon Director and Sports Director Emeritus Seth Bernstein (@SethBernstein67) tells the story of his WNUR Sports journey, and why Sportsathon is so important not just to him, but the next generation of staffers.

During my three-plus years at Northwestern, I’ve learned life changes faster than you’ll ever realize. Sit down and think about that for a moment. When you try to look four years into the future, it feels like a very long time away, an eternity. But if you look back at the previous four years, they seem to have gone incredibly fast. That’s because no matter what stage of life you’re at, you’ve probably done a lot of incredible things over the past four years. Time flies when you’re having fun. Seth in the press box at Lowell Park broadcasting a Cotuit Kettleers game.

As I sit here and reflect on my three-plus years here at Northwestern, I ask myself if I’ve accomplished everything I set out to do when I first applied here Early Decision as a senior in high school. My answer is a resounding yes, and it’s all because of the time I have spent at WNUR Sports.

Like many of the collegiate athletes I’ve covered, I also have a lifelong dream that I’m trying to fulfill. Their dream is to play their sport professionally at the highest level possible. Mine is to broadcast baseball professionally at the highest level possible—and it’s something I’m working extremely hard to achieve, every single day of my life.

WNUR Sports has been the first step for me on that journey. You have to live life one step at a time—so I’m not thinking about where I’ll be next year or in two years yet. I’m thinking about right now still, and where I’ve been.

To give you a sense of what I’m talking about, and how quickly WNUR Sports has changed my life, here are some of the things I’ve done over the past four years, relative to the end of high school.

• Nine months after graduating high school, I was named to my first WNUR Sports Executive Board position, and quickly secured new underwriters for our station in the midst of a terrible economic downturn.

• Ten months after graduating high school, I called Play-By-Play in a Major League Park for the first time, Miller Park in Milwaukee—and shared an elevator with the legendary Bob Uecker.

• Seventeen months after graduating high school, I stepped onto Wrigley Field as a broadcaster for the first time, my beloved Wrigley Field. And it was for a football game! The same ushers who back in the day made sure my excited, overeager, twelve-year-old self from getting too close to players as I sought autographs, were now on my side, helping me do my job to the best of my ability.

• Exactly two years after graduating high school, I began what will ultimately be a three year journey as the Cotuit Kettleers’ Play-By-Play Broadcaster in the prestigious Cape Cod Baseball League.

There are many other milestones, things I’ve done, and places I’ve been, but you get the picture. I still marvel at the fact that WNUR Sports has done all of that for one single kid from Chicago. If that’s just my experience, imagine what the combined experiences of 30 young broadcasters a year are.

I’ve always said I want to leave WNUR Sports better than when I found it. And when I leave in June, I think we’ll have accomplished that over the past couple of years. That’s why I ask you for your support during WNUR Sportsathon. It’ll help us broadcast more games than ever before and continue to improve our equipment WNUR Sports has allowed me to pursue my dreams and I want the next generation of WNUR Sports staffers to be able to do so, as well.