Posted on October 27, 2012 by WNUR Sports Leave a comment 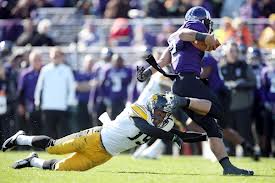 Well, it wouldn’t be a Northwestern game if it didn’t come down to the fourth quarter. As close as it seemed, the ‘Cats held off the surging Hawkeyes to claim a 28-17 victory heading into a much needed bye week. The ‘Cats were up by 25 in the middle of the third but after stalling on offense, the Hawkeyes came back with two touchdowns, and had possession with less than 2 minutes left before throwing incomplete on 4th and 3.

On the offensive side, Kain Colter finally had the game that fans had been waiting for since his showing against Indiana. He was 6-9 passing for 80 yards with one touchdown, coming on a beautifully placed 47 yard pass to Christian Jones, and one interception, coming off a badly thrown 30 yard deep pass attempt. However, Colter shined running, gaining 166 net yards and 3 touchdowns. Even when the Iowa defense put a spy on Colter, Colter was able to make big plays, picking up 6 first downs with his legs, even on some third and longs. Trevor Siemian came in for 1 pass attempt, completing it for 4 yards to Rashad Lawrence. The coaches tried to put Siemian into some of the 2nd quarter drives, but Colter was playing too hot to give the ball to Siemian.

However, the best day easily belonged to Venric Mark. Mark gained 162 yards, topped off with an amazing 72 yard at the beginning of the second quarter that could have easily been a touchdown, had the Iowa defense not given an outstanding effort to chase Mark down. Mark passed the 1,000 yard mark, leading the B1G conference and becoming the first 1,000 yard rusher for the Wildcats since Tyrell Sutton in 2006. Mark and Colter carried the offense in this game, and the lead they built up helped fend off the Hawkeyes in their all-too-familiar fourth quarter comeback. Colter finally seemed to fit in the system, and credit has to go to Mick McCall for finally having a solid game plan, where there was not too much mid-drive switching of the two qbs. Colter was able to get into a rhythm and drive the ‘Cats down the field without having Siemian in every other play. Overall, the offense definitely looked good, gaining 433 yards, 349 of which came on the ground. They converted 8 of 11 third downs, and were 3 for 4 in the red zone. This is the offensive showing that has been missing since the ‘Cats played Indiana, and it’s nice to see it back, functioning just as well as it had before conference play.

The defense also had a good game. The Hawkeyes scored a field goal on their first drive, but did not score until 5 minutes left in the third. The defense caused 4 punts, 2 turnover on downs, and only let the Hawkeyes convert 8 of 17 third downs. The secondary again seemed to be the weakest part of the defense, allowing 214 yards through the air, while the front 7 got significant pressure and only allowed 122 yards rushing. Again, the defense got tired at the end of the game, due to the inability for the offense to move the chains. In what seems like a problem every game, the defense is not getting enough rest in the fourth quarter, causing these comebacks. It’s has become so familiar that every Northwestern fan thought that the 25 point lead the ‘Cats had at the beginning wouldn’t be enough. Mental toughness and sustained drives are keys of the fourth quarter, and the ‘Cats seem to be lacking in both. If the Wildcats want to shed their Cardiac ‘Cats nickname, they must keep the ball in the hands of the offense more in the fourth quarter. In a blowout win like this, the winner would normally possess the ball more, but Iowa had the ball for 34 minutes and 25 seconds. The time of possession battle is a key for Northwestern going forward, as both sides of the ball seem to struggle in the fourth quarter.

The Wildcats now enjoy a much-needed bye week, and go into the toughest two game stretch on their schedule: Michigan State and Michigan, both on the road. Those two games will determine which bowl Northwestern will make, or if they could win the Legends division (I know you probably laughed when you read that, but it’s always possible).