Faces Made for Radio: End of Week 1

Posted on November 8, 2012 by WNUR Sports Leave a comment 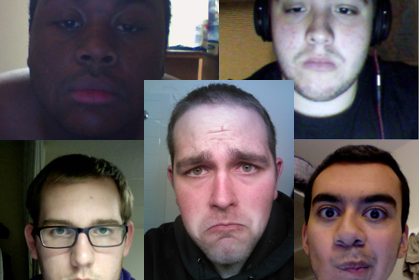 The WNUR Sports staff is tracking their progress through No-Shave November. There is good, and there is bad, but it’s mostly ugly. At the end of the month, you will pick your favorite radio face as the champion of the first annual Faces Made for Radio.

One week in, and things are already getting hairy for our brave competitors. Just not hairy enough. In the upcoming week, the men will separate themselves from the boys. Until then, you are stuck looking at this. WARNING: exposure to pictures below has been known to cause nausea, heartburn, extreme sadness, and a desire to jump into a fiery pit of lions. Why are the lions on fire? We have no idea. Just see for yourself. In his own words: “A week in, and my beard looks like the combination of that of a toddler and an elderly male. Is it peach fuzz? Is it gray? DOES IT EVEN EXIST?? These questions rush through my head as I toss in my bed, unable to sleep at night. I’ve decided I’m going to use a combination of Rogaine, manure, and Just for Men to exercise these demons and make this puppy sparkle.” In his own words (poetry style):

The red hairs are starting to appear.

The confidence, however… disappears.” In his own words: “Only one week into No-Shave November, and I already know I’ve peaked. My beard remains trim and proper; visually rugged but soft to the touch. Soon, my well-kempt facial hair will be replaced by a overgrown thicket masquerading as a beard. The compliments of my manliness will be replaced with looks of disgust from sorority girls who prefer their men to be as hairless as the day they were born. Others will wonder why my facial hair is red unlike everywhere else on my body, while I will stare in the mirror, bewildered that my mustache still does not connect to the rest of my beard. But until then, I remain the model of manhood.” In his own words: “It’s been a full week since this experiment started. So far, I don’t hate myself just yet. The beard is growing in slowly, but it’s not out of control or making my face itch. Well at least not yet. For now, I can keep hoping that I can grow a beard as classy as Dodgers’ Center Fielder Matt Kemp can. It’s the perfect blend of class and power, or as he calls it, Beast Mode.” In his own words: “My face gets cold when it gets hit by the harsh Chicago winds. I was ready to quit, then my phone rang. My idol James Harden was on the other line. He told me the greatest bearded men in history had to display great patience before they were rewarded with their magnificent facial hair. So I will wait. It better be worth it.”