Faces Made for Radio: End of Week 2

Posted on November 15, 2012 by WNUR Sports Leave a comment 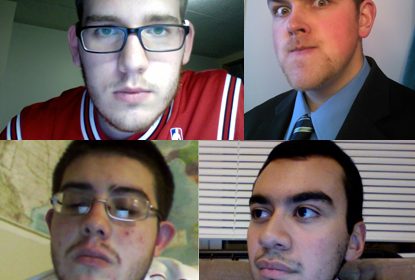 The gentlemen of WNUR Sports are growing out their facial hair for No-Shave November. Track their progress here, and be sure to vote for the best face made for radio at the end of the month.

After two weeks, tempers are running short. The WNUR newsroom has become a place of great hostility and angst as the itch of the beard begins to set in. Lives have been altered, friendships ended, careers shortened. Halfway through this challenge, and the guys are starting to have some qualms. How far will it go before someone breaks? In his own words: “Finally, after two weeks, I have gotten to the point where people are noticing that I have not shaved in a while. Unfortunately, they demonstrate this cognizance by putting their heads down and walking away hurriedly to avoid eye contact. Nobody wants to associate with this. I now know how Frankenstein felt in Mary Shelley’s novel. Parents cast gazes of judgement as they wonder what happened in my childhood to allow this to happen.” In his own words: “The beard is in full affect. The mustache is still working hard in the middle; not sure how the battle will end.  Almost halfway through the month and the length has increased dramatically since day 1.” In his own words: “I have come to the sad realization that we are only halfway through with the disaster that is No-Shave November. I spend 75% of my waking hours rubbing the mess I call a beard, hoping that somehow rubbing it will make the month go by faster. On Wednesday, I got a haircut, creating a visual contradiction between my orderly buzzcut and my unkempt facial growth. The little warmth my facial hair provides is offset by the constant itch that accompanies it. I can only hope that the rest of the staff agrees to a detente so I can shave once again.” In his own words: “So far I’ve had 4 people tell me that I should shave, and none tell me to keep the beard growing, so that’s not a good sign. This is probably the longest I’ve ever gone without shaving, and to be honest it’s exhausting.” In his own words: “Things seem to be going well. I visited home early in the month and my family did not think I looked homeless. I think I might aspire for that by the end of the month. Getting cold out side though, really need some growth or my face is going to freeze. Gonna look great for Thanksgiving though (fingers crossed).”