Posted on November 16, 2012 by WNUR Sports Leave a comment 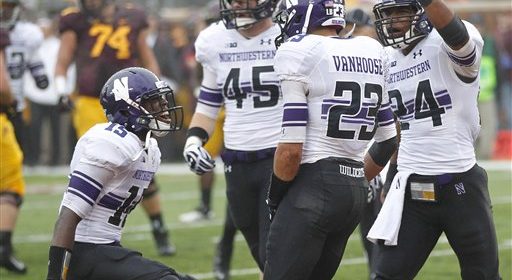 The WNUR Sports staffers offer their predictions for Saturday’s football game between the Northwestern University Wildcats and the Michigan State University Spartans by giving their victor, final score, and a player to watch. Jim Sannes (@JimSannes): Northwestern 20, Michigan State 17. While Northwestern’s rush defense has struggled a bit in Big Ten play, they have been outstanding overall this season. LeVeon Bell is, unquestionably, the best tailback Northwestern has seen this season, so it’s no secret what they have to do to win: contain him. I look for the Northwestern linebacking core to control Bell and keep the Spartans out of the endzone most of the day. Player to Watch: Damien Proby.

Zach Kisfalusi (@zKisfalusi): Northwestern 38 (Michigan) State 17. Dare I say the Cats win comfortably behind a power running game. The offense gets going early and never looks back. The defense slows down Bell but shuts down the passing game of the Spartans. Player to Watch: Mike Trumpy as he will get majority of carries this week for the Wildcats.

Michael Anders (@MikeAnders819): Michigan State 35, Northwestern 31. The sad thing is if Northwestern is going to lose, we all know how it will probably go. The Cats grab the lead 31-21 on a touchdown pass from Siemian to Dan Vitale at the end of the third quarter. Northwestern will then enter fourth quarter mode in which Michigan State scores two touchdowns in the last six minutes to steal another game from the Wildcats. Player to Watch: Trevor Siemian.

Jon Rosenberg (@BigJonRosenberg): MSU 28-24 NU. It kind of felt like the season ended last week, but it didn’t… Heading into a hostile environment and trying to shut down Le’Veon Bell won’t be easy. Player to Watch: David Nwabuisi (key to stopping Bell).

Jeffrey Eisenband (@JeffEisenband): 23-20 Northwestern. This game will bring Northwestern fans back to the Vandy/BC games when scoring was a rarity. Michigan State will make it tougher to get into the end zone, and the ‘Cats special teams will be forced to make plays. Northwestern played two of its best games after its two other losses, so there is no reason to expect otherwise this week. Player to Watch: Christian Jones.

Kevin Harris (@KevHarris711): 28-17 Northwestern. Michigan State has one of the stronger defenses in the country, but after putting up more than 30 points last week against Michigan (who had the 7th best defense in the country at the time) I see Northwestern’s offense having another strong showing. And considering Michigan State has also struggled to finish games this year and that there offense has been nothing special, Northwestern should beat the Spartans for the first time since 2007, preventing Michigan State from becoming bowl elgibile. Player to Watch: Ibraheim Campbell has a late interception to prevent another 4th quarter meltdown.

Nick Scoliard: Michigan State 21-17. The largest margin of victory in Big Ten play for Michigan State is 4 and the largest margin of defeat is also 4. They always keep the games close, and have scored in the 4th quarter in every Big Ten game they have played. I don’t see the ‘Cats being able to hold off the Spartans late if they keep it close. For Northwestern to win, Colter, Mark, and the rest of the offense need to come out of the gate swinging and get a big lead early. They haven’t done it yet, and I don’t see them doing it now. Player to Watch: Kain Colter.

Shawn Krishnan: 24-21 Northwestern. Although Michigan State’s defense has only allowed 16.3 ppg this year, they have not been able to find any consistency in their offense. Michigan State has relied too heavily on RB Le’veon Bell as their passing game has often been nonexistent. If Northwestern can convert in the red zone to get a lead early, Michigan State will not have the firepower to mount a comeback. Player to Watch: Kain Colter. If he can improvise effectively against this tough defense, the ‘Cats can come away with a victory.