Faces Made for Radio: End of Week 3

Posted on November 21, 2012 by WNUR Sports Leave a comment 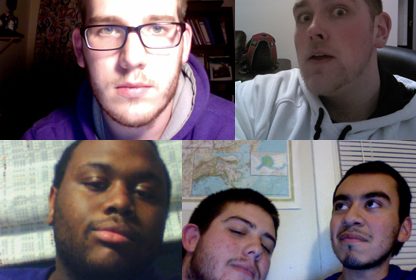 The gentlemen of WNUR Sports are growing out their facial hair in No-Shave November as part of the first annual Faces Made For Radio Competition. At the end of the month, your vote will determine the winner. Until then… nobody wins.

Twenty-one days. Five-hundred and four hours. Thirty-thousand, two-hundred and forty minutes. In that time, not a single good thing has happened to the faces of our brave WNUR Sports staffers. Even worse, though, is the fate of their on-lookers. In the WNUR newsroom, last week’s anger has turned into utter despair as the men realize that they still have nine days left to endure. Only the best will survive. In his own words: “At this point, I have abandoned hope. What little visible hair there is cannot compensate for the barren wasteland that is the rest of my face. I thought that my monthly haircut would make my facial hair more pronounced. JOKES ON ME, GUYS. If my face were to be lit on fire, I would let that baby burn in hopes that it would eliminate the shame. This friggin’ thing will haunt me to the grave.” In his own words: “I am a dirty, rotten cheater. I have not abided by the rules of No-Shave November. Last weekend, I was assigned to broadcast the Northwestern-Michigan State football game for WNUR. To avoid embarrassing the station by walking around the MSU press box with the atrocity that is my facial hair, I shaved my neck and trimmed the rest of my beard. I apologize to all the fans who supported me and have believed in me throughout this ordeal. I will continue growing my beard, even though it is now all a sham.” In his own words: “The neck beard is growing in thick. “The Region” chin strap would make my friends at home proud. I am now considering to keep it going for December or at least trim it and maintain a lesser version of the current.”

In his own words: ” At this point, I’ve lost all reasoning as to why I continue to go on with this experiment. It literally adds nothing to me and no one seems to like it. But you have to finish what you start, right? I’m pretty sure this will be the end of me.” In his own words: “Things are going much better. The Cats are 8-3, Global warming is making winter more enjoyable and I think my Goatee is just about. coming in. Can’t believe it’s already 20 days in. Feels like months ago I had that faithful encounter with a razor. But look at me now razor! You did not beat me! I am man! And my facial hair is more powerful than any force brought against me! AHHHHHH!!!!!”