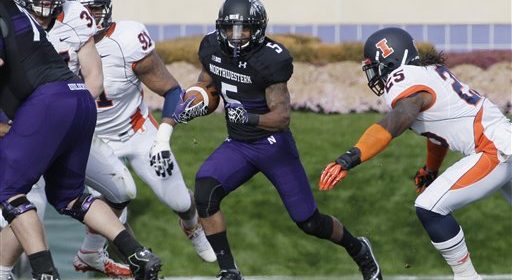 Photo Courtesy of the Associated Press

On Saturday afternoon, Northwestern and Illinois renewed their annual rivalry for the 106th time. A game that looked like a mismatch on paper, turned out to be an even bigger mismatch on the field.

Illinois got off to quick start, driving 78 yards on the game’s opening possession to grab a quick 7-0 lead. However, not much else went right for Illinois. Northwestern took the lead for good less than three minutes later on a Kain Colter touchdown run. The Wildcats added another touchdown on the first play of the 2nd quarter, when Kain Colter hit a wide-open Tony Jones in the back of the end zone. The Illini responded with a touchdown of their own, thanks to a 12-yard touchdown run from Riley O’Toole. From there on out, though, Illinois was quiet. Before the end of the half, Northwestern added 10 more points, which included a Venric Mark touchdown, to grab a 27-14 lead.

Northwestern was almost perfect in the second half. They controlled the ball for 22½ minutes, while also forcing two interceptions and a safety. In all, they outscored the Illini 23-0 in the 2nd half. Tyris Jones and Paul Jorgensen (a back-up lineman) caught touchdowns for Northwestern, and Mike Trumpy added a rushing touchdown. Illinois gained just 37 yards in the second half.

Overall, Northwestern outgained Illinois 450-242. The Wildcats carried the ball 67 times for 338 yards, with Venric Mark leading the way with 127 yards. In addition, Illinois was penalized eight times for 88 yards, which limited any chance of a comeback.

Illinois ends the season a disappointing 2-10, including 0-8 in conference. They have now lost 14 consecutive conference games and 16 of 19 overall. Many Illini fans will continue to call for the firing of first-year head coach Tim Beckman, but he will probably return next season.

The victory gives Northwestern their first 9-win season since 2008 and also gives coach Pat Fitzgerald his 49th win, tied for the most in school history. In addition, the victory sends 24 Northwestern seniors out on a winning note.

Up next, Northwestern will more than likely be playing in either the Outback or Gator Bowl on New Year’s Day against an SEC-team.