Posted on November 28, 2012 by Jim Sannes Leave a comment 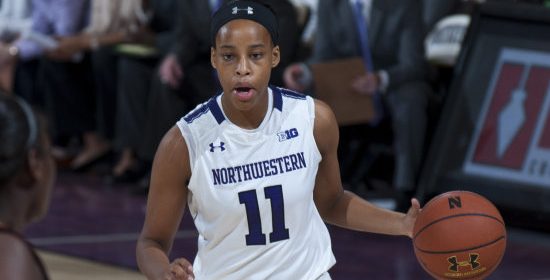 The Northwestern University Wildcats women’s basketball team overcame a 12-point first half deficit Wednesday to defeat the Boston College Eagles 67-63 and improve to 6-0 on the season.

The ‘Cats trailed 55-48 with only 7:02 left in the second half before finishing the game off on a 19-8 run to complete the comeback in the Women’s Big Ten/ACC Challenge.

Northwestern was led by two true freshman as both Lauren Douglas and Maggie Lyon lit up the scoreboard. Douglas, who Monday was named the Big Ten’s Freshman of the Week for the second time in only three weeks, finished with 18 points. The Wilmette-native Lyon added 16 points to go with her team-leading six rebounds and four assists. Lyon was also 4-9 from behind the arc as the ‘Cats drained a season-high nine 3-pointers.

The ‘Cats were able to snag the victory despite struggles from their two senior leaders, Kendall Hackney and Danielle Diamant. The duo combined to hit only four of their 23 shots from the field. Hackney finished the night with nine points and two rebounds, but did add in three steals. Diamant was able to find success at the charity stripe as she hit nine of 11 free throw attempts, finishing the night with 14 points.

The ‘Cats will be back in action Sunday as they head into Chicago to take on the DePaul Blue Demons on the road. Opening tip-off is set for 4 pm.