Faces Made for Radio: Before and After with Vote

Posted on November 30, 2012 by WNUR Sports Leave a comment 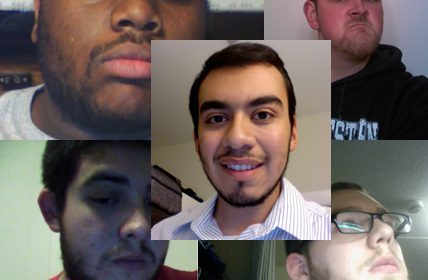 The gentlemen of WNUR Sports have completed their month-long quests for bearded glory as part of No-Shave November. Check out the before-and-after results and vote for the first annual “Faces Made for Radio” Champion.

It has come to this. The first annual Faces Made For Radio competition crescendos to its ultimate climax, leaving our fearless leaders to question every decision they have made in the last 30 days. As you consider your vote for the ultimate radio face, remember that this is the face that best exemplifies radio’s best quality: masking that which needs to be masked. TO VOTE, scroll down to the very bottom of the page. Choose wisely, and bless your eyes for dealing with this wretchedness for an entire month. Let the lobbying begin. In his own words: “They say a picture is worth a thousand words. My “after” picture says about two: “LOOK AWAY!!!” Also acceptable are, “Shield your eyes,” “What is that thing???” and “How long until puberty?” I am not proud of what has transpired over the last 30 days, neigh – I am ashamed. For this reason, I deserve your vote as the first annual “Faces Made for Radio” champion. Keep this mug away from the cameras. Do it for the kids. Do it for mankind. Do it… for America. In his own words: “The conquest is over. I have gone 30 days without shaving. I am contemplating keeping it for another month and shaving for the first of the year. I am proud to say that the beard has come in thick and the patchiness has gone away for almost a full connection. All I am waiting for is the soul patch to grow darker over time and the beard will be complete. I think the age difference has been dramatic as no longer does someone think that I am in high school still. I also would like to say that my beard is better than that of my roommate, John Castellanos and that is all.”

In his own words: “It has been a long strange journey. While I initially expected my beard to be an overgrown mess by the end of November, it has turned out not to be quite as bad as I imagined (yes, I did trim it two weeks ago, but I was on station business, so it should be forgiven). When I ran into a professor of mine who had recently written me a letter of recommendation, he told me that he liked my beard. Why would someone do this? To not hurt my feelings? Or perhaps he really didn’t think it was that bad. Yes, the inability to connect my mustache to my beard (which I’m beginning to fear is permanent) is an annoyance, but overall, the experience of No-Shave November has made me think twice about joining the ranks of other bearded Americans.” In his own words: “This month has been the definition of a roller coaster ride. Starting with a clean and smooth face at the beginning, it was interesting to go through the stages of growth. When the original stubble came out, it gave a nice shadow to my face, and I was content with the progress. Shortly after, however, the period of itchiness came about. I have to admit that it was the toughest part of the month. At all times, I wanted to scratch my cheeks off, and I hated myself for putting my face through such a trial. During this time, people started to notice the beard a lot more as well, and I got a lot of comments telling me that I should shave, that it didn’t look even, and that it just did not look good on me. Nonetheless, I was committed to keeping it until the month ended. This last week of November has taken an upward turn, as I received a few compliments and I was told that it was filling in nicely; looking a lot better than Jim’s beard (or attempt at one). Overall, I still think this was a poor life choice on my part, and I don’t plan on ever doing this again. As a reward for putting up with this experiment, I am treating myself to a fancy single blade shave as soon as the calendar flips to December. To our readers/listeners/followers, thank you for putting up with our shenanigans, and I hope you enjoyed laughing at us.”

In his own words: “And so it ends. I look like I haven’t seen the light of day in weeks. (I actually haven’t, Northwestern gets brutal this time of year.) My face is all warm, and fuzzy and snuggly and I have even gotten used to the condescending glares on public transportation. Even my girlfriend started talking to me again (sure it wasn’t until day 26 but I’ll take it). Do I regret this decision? Yes, a little bit. Have I learned something about myself? Yes, that I am an idiot. But that’s not important. What is important is that I get to shave in just a few short hours! And I can start to look like a decent and contributing member of society. Livin’ the hobo life for one more day. No Shave November… It’s been real. Real dumb!”