The NUmbers Guy: Breaking down the Mississippi State Bulldogs

Posted on December 3, 2012 by Jim Sannes Leave a comment 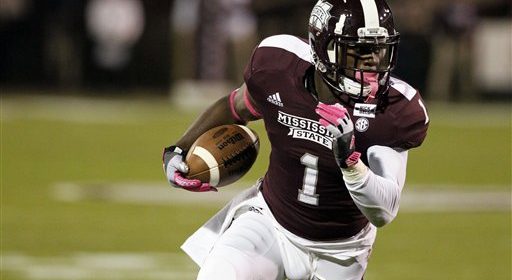 WNUR Sports Director Jim Sannes (@JimSannes) takes a look at Northwestern’s opponent in the Taxslayer.com Gator Bowl, the Mississippi State Bulldogs by analyzing the numbers behind their 2012 regular season.

In Coach Pat Fitzgerald’s office sits the mangled head of a stuffed monkey given to him during his playing days after a victory over Iowa. Fitz will be looking to add another head to his collection on January 1st as the ‘Cats try to get the bowl monkey off their back against the Mississippi State Bulldogs in the TaxSlayer.com Gator Bowl.

The Bulldogs (8-4, 4-4) of the SEC enter the game looking to extend Northwestern’s bowl victory drought to 64 years. To do so, they will have to overcome a tough end of the season that saw them go from 7-0 to 4th place in the SEC West. If you toss out their 45-14 victory over the dysfunctional Arkansas Razorbacks, the Bulldogs were outscored an average of 38.5 to 15.25. Granted, three of those losses were to Alabama, Texas A&M and LSU, the Bulldogs are not coming into this game with a full head of steam. What does that mean? This monkey be shakin’ in his cute little booties because Northwestern actually has a shot to win this one.

1-4: The Bulldogs were 1-4 versus bowl eligible teams this season.

Don’t get me wrong… a win against the Middle Tennessee Blue Raiders is awesome and all, but Mississippi State isn’t overflowing with quality victories. Contrast this with Northwestern, who went 4-2 against bowl eligible teams, their only other loss being to a Penn State team that won eight games. This comparison is certainly not apples-to-apples, but the manner in which Mississippi State lost to quality opponents was not promising.

To give some context to this because, let’s be real, nobody knows what that means, Northwestern’s quarterbacks have combined for a 125.0 rating this season. Russell has thrown for more than 260 yards five times this season, including each of his last three games. The junior was able to find success against a very tough LSU defense, completing 68.4 percent of his passes for 295 yards with one touchdown and one interception.

When Russell thrives, so do the Bulldogs. In Mississippi State’s eight wins, Russell has thrown 19 touchdowns and one interception. In their four losses, that number shifts to three touchdowns and five interceptions. He’ll be facing a Northwestern defense that ranks 101st in the nation in passing yards allowed per game, so just look away whenever Russell drops back to pass.

4: Running back LaDarius Perkins has rushed for 100-plus yards in four games this season.

This seems very pedestrian when compared to Venric Mark’s eight 100-yard games this year, but Perkins has been solid offensively for Mississippi State. Perkins missed Mississippi State’s loss to LSU with a quad strain, and the Bulldogs were held to only 47 yards on the ground. On the year, Perkins has recorded eight rushing touchdowns, but he hasn’t run one in since October 20th against Middle Tennessee. The ‘Cats rank 21st in the nation in yards per carry against average at 3.6, so Perkins should provide a good test on New Year’s Day. The junior is also an asset in the passing game as he picked up two receiving touchdowns against Arkansas and has seven in his career. In his career, Bumphis has 24 receiving touchdowns. Every receiver and superback on Northwestern’s roster has a combined 19. Six of Bumphis’ 12 touchdowns have been 20 yards or longer. Uhhhh, have fun, Nick Vanhoose. While Bumphis is only 5’11”, he reportedly ran a 4.4 second 40-yard-dash as a senior in high school. Bumphis is the Mississippi State school record holder in career receiving touchdowns (24, as previously noted), yards (2252) and consecutive games with a reception (29), and he could pass David Smith for most career receptions (162) by hauling in seven passes against Northwestern. This dude just doesn’t seem fair.

166: Mississippi State is allowing an average of 166.0 rushing yards per game.

When facing a Northwestern team that ranks 14th in the nation with 230.9 rushing yards per game, this could be a slight problem for the Bulldogs. Just because I want to see Kain Colter salivate, Johnny Manziel torched Mississippi State for 129 yards and two touchdowns with his legs on their November 3rd meeting. After what I have seen from Patrick Ward, Brian Mulroe and Brandon Vitabile this season, I have seen no reason to believe that the Bulldogs will be able to contain the Northwestern ground game. Look for both Colter and Mark to have big days, and look for Coach Fitz to have a big ol’ smile on his face every time those two touch the ball.

Obviously, it’s a bit disappointing not to be in the Capital One Bowl. However, Todd Gurley and Aaron Murray might have abused the ‘Cats into submission. Here, Northwestern will face a very respectable Mississippi State Bulldog team in a game that the Wildcats have a legitimate shot at winning. Optimism should abound in Wildcat territory… unless, that is, you are a stuffed, 63-year-old monkey.