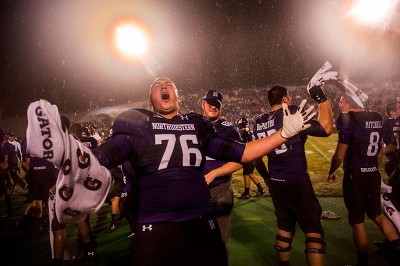 After a nice month-long break and a fancy roster update, I’m back for Northwestern’s bowl showdown with Mississippi State. You can throw out the records and recent trends for each team in this game: one game will decide how Northwestern’s season will be remembered. Their opponent is a solid Mississippi State team that doesn’t look as impressive on paper than they do in the game. This most likely comes from the fact that everyone at EA Sports loves the SEC more than any other conference. Can Northwestern overcome the SEC bias?

As always, I’ll use NCAA Football 13’s SuperSim function under default settings to determine the winner of Northwestern’s game.

In the early part of the game, this one looked like it was destined to be a defensive struggle. Neither team could sustain a drive; although Kain Colter was able to complete some nice passes underneath the Bulldogs’ deep coverage. The only points of the first quarter came off of a 34-yard field goal by Jeff Budzien.

The second quarter began in a similar fashion. Mississippi State failed to complete passes and Northwestern’s offense stalled in the red zone. A second Budzien field goal put the ‘Cats up 6-0. After Mississippi State three-and-out set the ‘Cats up with good field position. They methodically worked their way down the field with an 11-play drive, punctuated by a 2-yard TD run by Tyris Jones to give Northwestern the 13-0 edge.

Northwestern would take that lead into halftime, and the first half truly belonged to the ‘Cats. The keys to the first half were Northwestern’s defense (which kept Mississippi State under 100 yards) and the ‘Cats’ passing attack, which gained 180 first half yards.

Mississippi State’s offense looked different early in the second half, needing only 8 plays to drive 80 yards for their first touchdown. 13-7 Northwestern. Both teams turned to their rushing attacks at this point, as the weather in Jacksonville got rainy.

Northwestern was still clinging to the 6-point lead at the start of the fourth quarter, but they were pinned deep in their own territory by a great punt. The ‘Cats drove into Bulldog territory on the strength of some Venric Mark catch-and-run plays, but Jeff Budzien’s 49-yard field goal was no good. The Bulldogs had a chance to respond, but failed to get a first down. Northwestern got the ball back near midfield with 3 minutes to go and a chance to run out most of the clock. The ‘Cats inexplicably came out throwing, but it worked, netting one first down. The fourth play of the “clock-killing” drive was a 35-yard touchdown run by Venric Mark, his longest run of the game and a true gamebreaker that gave Northwestern a 12-point lead. Kain Colter added the two-point conversion rush, so the Northwestern lead was 21-7 with just over 2 minutes to play.

Of course, it wouldn’t be a Northwestern game if things went smoothly from there. The Bulldogs drove the length of the field quickly, preserving all three timeouts and scored a touchdown with 1:07 remaining. Northwestern recovered the ensuing onside kick, but two short runs and two timeouts left Northwestern with third-and-eight with 55 seconds to play. If they didn’t earn the first down, Mississippi State would get the ball back. The call: read option with Kain Colter and Venric Mark. The result: 15 yard run by Kain Colter. First down. Ballgame. Northwestern wins, 21-14.

The ‘Cats ended a long bowl drought by beating an SEC team on a New Year’s Day bowl game. Sounds like a successful end to a great season. The keys in this game were the usual suspects. Kain Colter mixed the passing and running threats and Venric Mark went for over 100 yards on the ground. On the other side, the Wildcats didn’t give up the big play. The Bulldogs rushed for 97 yards with a longest run of 11 yards. Through the air, Mississippi State managed just 163 yards; their longest pass was 24 yards. In a game that was all about field position, Northwestern punted fewer times but had better punting averages.