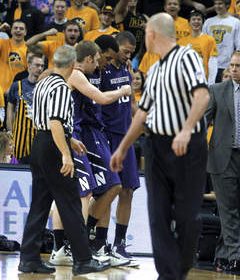 WNUR Sports Director Zach Kisfalusi (@zKisfalusi) talks about how the Northwestern Wildcats men’s basketball team can, despite their vast injuries, play with pride and finish the season as a spoiler in the Big Ten. If Northwestern’s season could get any worse, fans would be in absolute shock as injuries have ravaged the team this season. In Iowa, the injuries increased with Alex Olah and Jared Swopshire going down with new concerns; the obstacles for the Wildcats are growing by the day exponentially. The supposed improved depth on this year’s version of the Wildcats has been tested and exposed with injuries and youth.

The list of injured ‘Cats is vast: freshmen Olah, Sanjay Lumpkin, and Chier Ajou; seniors Drew Crawford and Swopshire. Also, Reggie Hearn and Nikola Cerina have battled injuries this season at various points. Basically, all Northwestern fans are praying that minutes-eater and point guard Dave Sobolewski can skate through the rest of the season without catching the bug that has plagued the team.

Even with all the injuries and unexpected obstacles, the Wildcats have played some good games during the slate of the conference schedule with wins over a young Purdue team and a bipolar Minnesota team. I am in no way saying this team has postseason aspirations, but this team can exhibit a quality forgotten by many: pride. If the Cats can play their best with energy and determination for the remaining month of the regular season, there is chance for a few more conference wins.

The ideal situation is to play the role of spoiler for their remaining 7 games and the B1G tournament in Chicago. With a game against bubble team Illinois, two against top team Ohio State, the finale against Michigan State, and a battle with Wisconsin, the only game where I would choose Northwestern to win is against Penn State. Even with slim chances, this team has proved one thing this year for sure; expect the unexpected. No one saw them going into Baylor and beating the Bears or losing to Nebraska or UIC with a lack of any offense. Optimally, I would like to sit here and tell you what their record will be as the team ends the season, yet I will take the approach of sitting back and watching from a far.

I will say this to all Wildcat fans to console any built up emotions about this team. Northwestern men’s basketball has the talent to improve in the future if discipline and the fundamentals are there. The games will be hard, the preparation harder, but the rewards could be grand if Northwestern plays with the desired pride needed to compete in this conference on a consistent basis.