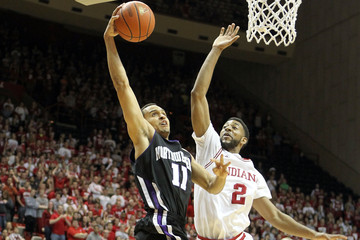 WNUR Sports Director Jim Sannes (@JimSannes) takes a look back at the 2012-13 Northwestern University Wildcats men’s basketball season, handing out his award for team MVP and recapping the highlights and lowlights. So, the 2012-13 Northwestern men’s basketball season was a bit painful. You know what else is painful? Being a Cubs fan, seeing offensive linemen run shirtless and watching terrible Lifetime movies on a Saturday night. There you go. It could be worse. I actually felt a bit nostalgic as I watched the team walk off the court for the final time in the regular season on Sunday. Not because I wanted this season-that-wouldn’t-die to continue, but because there were actually some endearing storylines that still made this team fun despite losing their last eight games. There was the former walk-on that became the team’s leader, the embattled but steadily-improving freshman class, the grad-student transfer that played his heart out only to fall prey to injury, and, of course, the coach fighting for his job once again. This is one that ‘Cats fans won’t want to remember, but there was still plenty to take away from the year that was.

You can debate this based on the definition of “valuable” as the team struggled more without Jared Swopshire than without Hearn, but we’ll have more on Swopshire later. Hearn increased his scoring output by 78.5 percent from his junior year (7.4 points per game) to his senior year (13.2). With Drew Crawford out, opposing teams would often put their best defender on Hearn. He still managed to finish second on the team (behind Swopshire) in field goal percentage at .442. He also led the team in points and steals while finishing second in rebounds. Beyond that, Hearn set a model example of how to play the game the right way. On a team dominated by youth, that is possibly his most valuable contribution.

I could not care less that Minnesota ended up semi-tanking as the year went along. I could not care less that the ‘Cats shot 53.1 percent from the free throw line in the “highlight” of their season (the Gophers shot 41.2 percent). This game inspired WNUR sports-director-elect Joe Misulonas to write a column about how Northwestern still had a shot to make the tournament. It was their second win versus a top-25 team in a week, and things were looking up. Annnnnnnnnnnnd then the ‘Cats lost 10 of their next 11 to finish the year to finish 4-14 in conference. You shut your dirty mouth, reality. You shut your mouth RIGHT NOW. Honorable mention: Hearn starting 9-9 from the field in a 75-60 win over Purdue.

Lowlight: February 9th – Loss on the road at Iowa.

Not only did this game officially end any hopes Northwestern had of salvaging a good season, but it ruined the momentum they had after a big win over Purdue and cost them Swopshire for the season. As an update on a stat I gave last week, before the Swopshire injury, the ‘Cats outscored opponents 1505-1458. After the injury, they were outscored 506-379. Despite missing the last seven games, Swop led the team with 160 rebounds (24 percent more than second-place Hearn who had 129). The loss at Iowa was the start of the eight-game slide that ended the regular season. Honorable mention: 50-44 loss to the University of Illinois-Chicago. Freshman of the Year: Alex Olah

How cool is it that this was a tough category to pick? There were four freshmen (Olah, Tre Demps, Kale Abrahamson and Mike Turner) that averaged at least 16 minutes per game. Over one third (36.6 percent) of all minutes this year went to freshmen. Olah took the cake in this category for his marked improvement from the beginning of the season to the end and his superb court vision. After seeing many previous big men fall short of expectations, Olah gave ‘Cats fans something to be excited about for the future. Sure, his rebounding could have been better. Sure, he struggled defensively at times. But his progression throughout the year, on both ends of the court, means center may no longer be a black hole for Northwestern basketball. Honorable mention: Tre Demps.

When people look back at this season, I’m not sure what they’ll see. They could see a missed opportunity, the end of an era, or a lost cause. Or it could be the final season before the ‘Cats finally reach the promised land. The only thing that is certain is that it won’t be a season without intrigue, for better or for worse.