The Hidden Gem of NU Athletics 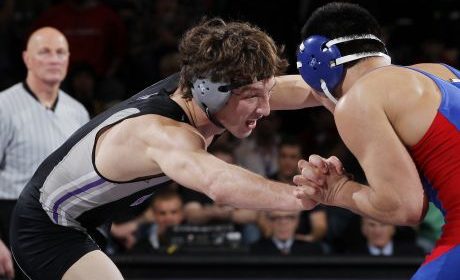 Over the past weekend, Northwestern students had a lot on their plate. Over 1,000 students took part in Dance Marathon which kept them unaware of the sporting events that took place this past weekend. For those who weren’t at DM their eyes were glued to the various college basketball games that happened this weekend. On Thursday morning the Women’s Basketball team lost to Iowa in the Big Ten tournament 60-55, then Thursday night the Men’s Basketball team lost to Penn State 66-59 on Senior night, and finally on Sunday the Men’s Basketball team lost their final regular season game to Michigan State 71-61. If you weren’t watching Northwestern Basketball you were probably watching #3 Duke dominate UNC 69-53 in Chapel Hill on Saturday, and then #2 Indiana squeeze past #7 Michigan in Ann Arbor 72-71 on Sunday night.

Lost in all of this college basketball mayhem, is the fact that Northwestern actually won a Big Ten
title this past weekend. Given, it was not a team title that was won, but instead an individual title at the Big Ten Wrestling Tournament. Senior Wrestler Jason Welch won the 157 lb weight class at the Big Ten tournament, and while that isn’t a surprise for me or anybody else who follows the Northwestern wrestling team, it might be a shocker for any normal Northwestern student. When people think about great Northwestern sports they think about our outstanding football team, or our elite Women’s Lacrosse team. Last year our soccer team won the Big Ten tournament and held a share of the regular season title this year, and that received a big deal of press. However, I am not sure that Jason Welch will get that same recognition for his outstanding career topped off by this Big Ten title. Sure, right now nusports.com has devoted their entire home page to Welch in an attempt to broadcast this outstanding accomplishment. But I highly doubt that more than 5% of the Northwestern Student Body will know about what Welch achieved this past weekend.

Jason Welch’s career at Northwestern has been a tremendous accomplishment for any athlete. During his 4 years as a Wildcat, Welch accumulated an overall record of 108-21 with a 62-5 dual meet record, and a 28-4 record in Big Ten dual meets. Just think about that last number, 28-4 in Big Ten dual meets. In Wrestling, the Big Ten is equivalent to the SEC in football in terms of NCAA dominance. Minnesota is ranked #1, Penn State is ranked #3 and Iowa is ranked #5. Those three teams are always at the top of the NCAA rankings, and give Northwestern a tough schedule every year. Now think about the fact that Welch averaged a loss per year in the toughest conference in NCAA wrestling. That is ridiculous.

Now to stress how outstanding of a wrestler Welch is, in the past three seasons he only lost in a dual meet 2 times. Last season, he went undefeated going into the finals of the Big Ten tournament, where he lost to Iowa’s Derek St. John who eventually went on to defeat Welch again in the NCAA semifinals and win the NCAA tournament for the 157 weight class. So until the postseason, Welch went undefeated, but unfortunately lost three times in the two tournaments, causing him to get 2nd in the Big Ten and 4th in the NCAA. But he was still able to hold the #1 ranking for a majority of the season last year and made the final of the Big Ten tournament and the semifinal of the NCAA tournament, which resulted in him getting named an All-American, which is a very impressive feat.

This season, Jason Welch only has one loss on the entire season, and that was a 8-9 loss to 7th ranked James Green from Nebraska. In his past 8 matches, he has 3 tech falls and 4 major decisions. He only had one pin during the regular season, but that is because Welch mainly goes for points and take downs due to the fact that he is a lot more skilled at getting points this way. However, when Welch got into the Big Ten tournament, a new beast arose. He won each of his first two matches decisively (7-2, 8-1). He reached the finals where instead of meeting the #1 seed who gave him his first two losses of the season last year in Iowa’s St. John, he got the opportunity to avenge his only loss on the season to the 4th seed, Nebraska’s Green. And avenge it he did. After heading into the third period down 4-1, Welch was able to get a reversal and riding time would give him a 4-4 tie, but with 22 seconds Welch was able to get his second pin of the season to secure his first ever Big Ten title.

For a wrestler who has only seen 11 losses in his past three seasons, and only 3 losses in the past 2; a wrestler who has finished third, second, and second again in the Big Ten tournament during his first three collegiate seasons; and a wrestler who is a two-time all-american; winning the Big Ten tournament in his Senior year is a perfect way to cap off an outstanding career. He is the 30th Wildcat to capture a Big Ten title and first since Jake Herbert won the 184 title in 2009. I look forward to seeing what the number one seed will be able to accomplish in the NCAA tournament as that will be the tremendous ending to an outstanding collegiate career. The only downside, is that he has dominated in a sport that is not followed by many, and not many of his fellow students will know about what he has accomplished in his four years at Welsh-Ryan Arena.