What If? Coach Collins’ Recruiting Skills

Posted on April 4, 2013 by Cameron Songer Leave a comment 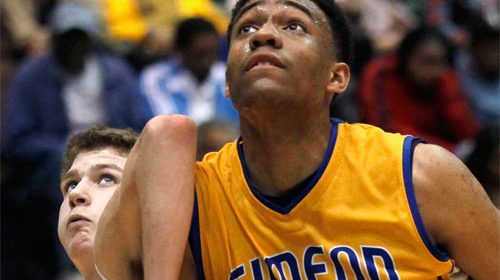 WNUR Sports Online Content Director Cameron Songer (@CameronSonger) dabbles into fantasy land to see what would happen if Chris Collins were to magically get Jabari Parker to attend Northwestern instead of Duke. Photo by the Associated Press

The biggest and most dangerous question in sports is the “what if” question. It can drive fans, coaches and players crazy and often leads to intense debate. In the first installment of this series, I’ll ask what if new men’s basketball coach Chris Collins played a much bigger role in recruiting at Duke than anyone realized.

APRIL 10, 2014- EVANSTON- Northwestern freshman forward Jabari Parker surprised no one today when he declared his eligibility for the upcoming NBA Draft. The past year has been a wild one for Parker and the Northwestern Wildcats. “I wish Jabari would consider staying for a second year in Evanston,” said Wildcats head coach Chris Collins. “But everyone knew Jabari had NBA talent since he was in high school.” Parker was the #2 recruit in the ESPN100 for the class of 2013.

Parker’s announcement comes about a year after his much more shocking announcement that he wanted to follow Collins, a former Duke assistant, to Northwestern rather than play at Duke, the program to which he committed in December 2012. “One of the biggest reasons I chose Duke was because of Coach Collins,” said Parker. “When it was announced that he was going to NU, I saw an opportunity to follow him and play closer to my friends and family in Chicago.” Parker also mentioned the opportunity to make history by leading the Wildcats to their first NCAA Tournament, a goal the team achieved. Still, many Cats fans had higher expectations for the season.

The Wildcats entered the 2013-2014 with tremendous fanfare, thanks to Parker, the highest-rated recruit to ever play basketball at Northwestern. Parker teamed up with senior Drew Crawford to create one of the most offensively capable frontcourts in the Big Ten. Those two joined sophomore center Alex Olah and juniors Dave Sobolewski and JerShon Cobb as Northwestern’s starting five, and the team jumped out to a blistering 10-0 start.

“We were selling out weekday games in December against Mississippi Valley State,” said Crawford. “I’ve never seen so many fans at Welsh-Ryan in my four previous years here.” The athleticism of Parker and Cobb overpowered most of the Wildcats’ early foes, but the team went through some growing pains, as many of the players initially recruited to Bill Carmody’s Princeton offense struggled in the free-form, up-tempo style Collins and his staff picked for Parker.

“I really appreciate how much Coach Collins let me run the offense and show off my skills,” said Parker. “But I know that it didn’t always sit well with the older guys.”

One team veteran who unexpectedly struggled while sharing the floor with Parker was Sobolewski, who was accustomed to handling the ball in a traditional offense. In Collins’ new offense, the ball was often in Parker’s hands, setting up plays for teammates the way the Heat use forward Lebron James. With fewer touches and less competition behind him (the scholarship that would have gone to guard Jaren Sina, now at Butler, instead went to Parker at the last minute), Sobolewski’s numbers dipped in his junior season.

“Some people blame Jabari or the coaching for the dips in production from Sobolewski and Crawford,” said Collins. “But what am I going to do? When you have an elite talent like Jabari, the ball should be in his hands. It’s not like he didn’t earn it. He led the team in rebounding.” Parker’s strength on the glass kept Northwestern out of the cellar in Big Ten rebounding stats and covered the sometimes-inconsistent play of Olah.

When the Wildcats stumbled at the start of conference play, there were mumblings that Collins was playing favorites with Parker, the only player he was directly responsible for bringing to Northwestern. After a 2-4 start in the Big Ten, senior captain Drew Crawford called a players-only meeting that seemed to clear up a lot of the team’s issues. They finished the season with four straight wins, enough for seventh place in the Big Ten. Most experts agreed that the team needed at least one win in the conference tournament to get an at-large bid to the NCAA tournament.

Wildcat fans suffered from flashbacks to the 2012 Big Ten tournament, when the team was in a similar situation but lost to Minnesota. 2014 was different. “Jabari played out of his mind in Indy,” said Collins. Parker averaged 32 points per game in the conference tournament. Northwestern cruised past 10-seed Purdue and took Indiana, a national top-ten team, to overtime before losing in the tournament quarterfinals. Days later, Northwestern earned its first trip to the NCAA tournament as a #9 seed.

The Wildcats held a 10-point lead in the second half of their opening game against San Diego State, but couldn’t close the game, ultimately losing by 8. “A lot of people in the media were saying we were ‘just happy to be there,’ but we played hard,” said Collins. “I mean, we were happy to be the first Northwestern team to make the tournament, but we came to win.”

Although the 2013-2014 season was a success for the Wildcats, an uncertain future looms ahead. The team loses its top two scorers and rebounders to the NBA Draft, Parker and Crawford. Many of the young players, including Abrahamson, Demps and Turner, who developed during the 2012-2013 campaign, saw their roles diminish behind the lights of the Jabari Parker Show.

That show has packed up and moved on, and Coach Collins is working to convince fans that Northwestern doesn’t plan to welcome more ‘one-and-dones’ to their basketball team. “This season with Jabari and making the tournament was a special thing,” said Collins. “We’re not turning Northwestern into the Kentucky of the Midwest.”