The NUmbers Guy: Why Northwestern Women’s Lacrosse Will Win the National Championship 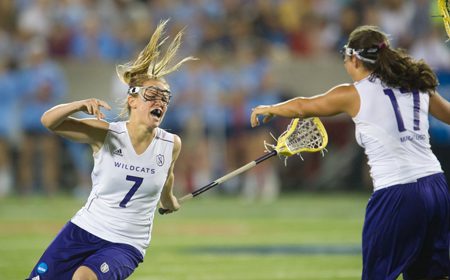 I realize I’m not making a ground-breaking statement by saying that the team that has won seven of the last eight national championships is a favorite to win it again this year. It’s like saying that Cadbury cream eggs are delicious and Pete Campbell is a waste of human skin. But, with Maryland emerging as the favorite to dethrone the ‘Cats (again), let’s dish out why you can never count out the champs

In case you didn’t get the memo, Alyssa Leonard FREAKING RULES! She is the Northwestern career record holder in draw controls with 272 after breaking Kristen Kjellman’s record of 268 on Friday against Duke. Did I mention she’s a junior? At this point, it would be a surprise if she doesn’t break Kristen Millar’s Division-I record of 353 career draw controls.

BUT THAT’S NOT ALL, KIDDOS. This year, Leonard has become an offensive machine, too. She is second on the team in goals (23) and first in assists (9). And she was on The SportsVoice earlier this year, so she just has brownie points out the wazoo.

2. Erin Fitzgerald ain’t got no time for your shoddy defense

While I was typing this sentence, Fitzgerald just bolted between two Blue Devil defenders for another goal. Shocker. She is now ninth all time at Northwestern in goals with 177. Fitzgerald’s 46 goals this season are twice as many as Leonard who sits second on the team. After winning ALC Offensive Player of the Week last Monday, Fitzgerald decided to celebrate by demoralizing Duke to the tune of five goals Friday. Her athleticism makes her nearly impossible to match-up with. Just imagine Venric Mark with a stick and a ponytail.

You know that over-used saying of “defense wins championships?” I’m uncreative, so I’m going to use that here because, well, it’s true. With my obviously superb lacrosse knowledge (what’s a groundball?), I’ve arbitrarily picked three components of a great defensive team:

It just so happens that the ‘Cats have one of the best in Bridget Bianco patrolling their crease. If the season were to end today, Bianco would have the third-highest single-season save percentage in Northwestern history at .497 and fourth in goals against average at 6.82 (she is also third in the nation in this category). Bianco tied a career high Sunday against Stanford with nine saves and helped shut down Duke Friday with her willingness to exit the crease and force the offense to make mistakes. And saying her last name is wonderful if you are alone and need something to do.

Oh, hey, Taylor Thornton and Gabriella Flibotte. Funny seeing you here. These two seniors have been outstanding this year for the ‘Cats and make their difference near impenetrable. Thornton is the defending Lacrosse Honda Sports Award recipient for the top player in the nation, and she has lived up to that standard again this year. Not only has she maintained her typical defensive prowess (30 groundballs, 17 draw controls, 17 caused turnovers), but her scoring has been back up in the last few weeks (12 goals in the last six games).

Flibotte leads the team in groundballs (39) and caused turnovers (33) and is second in draw controls (31). If there’s ever a tussle for the ball, it always seems like Flibotte’s the one that emerges with possession for Northwestern. These two give the ‘Cats the athleticism to hang with any team, and their play as of late could indicate great things to come in post-season play.

4. Kelly Amonte Hiller is a wizard

I have run out of reasons that Amonte Hiller has had so much success, so I’m just going to assume she was ticked after not making the Quidditch team, so she decided to play lacrosse instead. That could explain the struggles of Duke goalie Kelsey Duryea, who entered the game as the nation’s leader in save percentage, but exited having only stopped .333 of the shots she faced. I made Amonte Hiller the “brains” of the ideal Northwestern coach last week (meaning I put her hair on Pat Fitzgerald’s head) because she somehow always finds a way to make her team play its best when it matters most. Whether or not she’s a wizard is debatable, but I’m just saying you probably shouldn’t be surprised if she goes all “Confundus” on y’all.

For those four reasons, I think Northwestern women’s lacrosse should be the favorites still despite their early-season loss to UNC. I’m also the one that said Northwestern football would go 6-7 this year and that Rush Hour 3 wouldn’t suck, so there’s that.