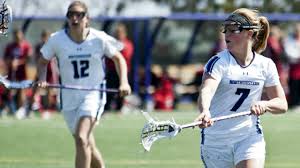 WNUR’s Lynden Ostrander recaps the past week for the Northwestern Women’s Lacrosse team and preview their upcoming game against no. 16 ranked Penn.

After getting walloped by 2nd ranked Florida 22-4, the No. 4 Northwestern Wildcats bounced back with a 10-8 win over 9th ranked Notre Dame on Thursday, heading into Saturday’s game against rival #16 Penn.

Yes, the Cats’ were swallowed up by the Gators. But let’s remember that was Florida’s first senior class’s last home game and the momentum was totally on their side. It seems Florida is “that team” for Northwestern, and the Cats’ must vanquish them in the ALC Tournament so they can get over that mental hurdle. They’ve gone O-fer the past 4 games against the Gators.

But the Cats’ rebounded from the shellacking and gutted out a big win on the road against the 9th ranked Fighting Irish. However, the concern I have for Northwestern is this: will they neutralize the opponent’s hot hand?

Against Florida, Shannon Gilroy had 5 goals on a mere 6 shots, more than the whole Northwestern team. Versus Notre Dame’s top goal-getter of the contest, Lauren Sullivan had four goals on 6 shots. Northwestern has to do a better job of recognizing who has the hot-stick, contain that threat and make another person beat you. If you’re the Cats going forward you can ill-afford to let goal scorers get going, gain their team momentum and turn the tide their way.

Northwestern had a 2 -goal lead with 11 minutes remaining against Notre Dame and held the ball for a whopping 9 minutes, milking the clock down to 2 minutes before attempting a shot. Umm, do you really think Maryland or Florida will allow you to do that? Think again.

Up next for the Wildcats is a pivotal momentum-building game heading into the ALC tournament against rival Penn. Penn is obviously a less formidable opponent than the likes of Florida or Notre Dame, but Northwestern needs to finish the regular season on a good note, and the home crowd certainly help

Penn has won 4 overtime games, 2 of which occurred against the only ranked opponents they have played all year.

However, if Taylor Thorton goes scoreless like she did versus Notre Dame, the Cats will be in a catfight. She needs to step up, lead her team at this crucial juncture of the season and play like the defending national player of the year. Erin Fitzgerald had 4 goals last game and playing phenomenal.

If Northwestern wants to win on Saturday night they should give Penn a heavy dose of Erin Fitzgerald and let Taylor Thorton get some shots on net and close the game out.