What If? Going Streaking

Posted on May 1, 2013 by Cameron Songer Leave a comment 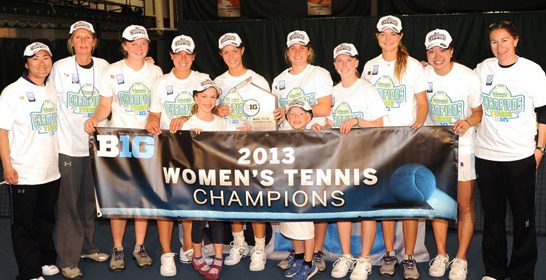 In this week’s “What If,” WNUR Sports Online Content Director Cameron Songer (@CameronSonger) compares the streak of Northwestern women’s tennis team to others in college sports.

This week’s “What If” doesn’t really have a “What If.” Sorry. My brain is fried from a combination of midterms and the fact that the Northwestern women’s tennis team just won their 15th consecutive Big Ten championship and will go to the NCAA tournament for the 15th consecutive year. Rather than use this fact to launch into some alternate reality like I did last week, let’s just take a look at how this streak stacks up to other championship and postseason streaks around the NCAA. The longest Big Ten football champion streak is 5: Ohio State from 2005 to 2009. This streak would include 2010, but they vacated their wins in 2010 due to violations. OSU wouldn’t have won in ’05 or ’08, but Penn State had to vacate those titles. To go back a bit further, Ohio State won at least a share of the championship 9 out of 10 times from 1968 to 1977. 6 of those 9 championships were shared with Michigan, a problem we’ll never have again now that the Big Ten plays a championship game for football. (Playoffs are a good thing!)

In Big Ten men’s basketball, the record for consecutive titles is relatively puny. Ohio State won partial or whole Big Ten rings 5 in a row, from 1960 to 1964. That 1964 season was also the year UCLA began its run of championships under the legendary John Wooden. In other words, that was a long time ago.

Looking beyond the Big Ten, one of the most impressive streaks in major college sports is Kansas men’s basketball. The Jayhawks have won at least a share of the Big 12 championship for 9 straight years. The Big 12 is perennially considered one of the toughest conferences in the country, but their streak is still shorter than Northwestern women’s tennis by more than the length of one presidential term.

What about college football? The most impressive streak there is the fact that Florida State has been to 32 consecutive bowl games. That streak includes 9 consecutive ACC Championships from 1992 to 2000 and two national championships. For the most part, the team posted excellent records during this stretch, but has recently included a 7-win season in 2007 that has since been erased due to player eligibility issues. The 2009 team snuck into the postseason with a 6-6 regular season record. The Seminoles have an impressive streak, but hardly dominant.

The streak that comes closest to matching Northwestern women’s tennis is Kent State women’s golf, which has won 15 consecutive MAC titles. In fact, the Golden Flashes women’s golf program is the only one to ever win a MAC title. Women’s golf has only been sponsored by the MAC since 1998-1999. I would make a joke here about how the MAC is just the Big Ten with directional modifiers (hi, Western Michigan!), but the number one draft pick in the NFL this year came from the MAC, so it gets at least a few more days’ worth of a grace period.

The truly ridiculous streaks in college sports are found at the Division III level. The Kalamazoo College Hornets men’s tennis team has won 75 consecutive championships in the Michigan Intercollegiate Athletic Association. Their first title in that stretch came in 1936. That’s a really long time. Back in those days, a gallon of gas cost 10 cents and it had only been 30 years since the Cubs won a World Series. Kalamazoo’s grip on the MIAA is slipping, though. This year marks the first time there has been a three-way tie for first place atop the MIAA. It’s also worth mentioning that the population of Northwestern’s Foster-Walker complex represents about half of the undergraduate student body at Kalamazoo College.

In Division III men’s swimming and diving, Kenyon College in Gambier, Ohio won 31 consecutive NCAA titles. Not conference titles. NCAA championships. After two seasons of slacking off and not winning the NCAA championship, the Lords returned to their winning ways this year. Kenyon College is located in Gambier, Ohio, a village of just under 2,400 people. The closest major city is Columbus, just 45 miles away. Still, the streak of NCAA championships is probably the most impressive on this list. Northwestern women’s tennis, despite their trips to the postseason, have never won an NCAA title. The team at Northwestern that’s closest to that mark is women’s lacrosse, currently the back-to-back defending national champion. Their streak would reach 31 consecutive titles if they raised the trophy every year from now until 2041. Get on it, coach Amonte-Hiller.