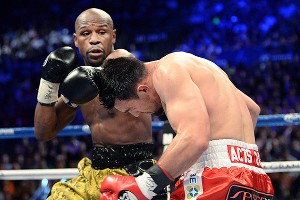 Saturday night, Floyd “Money” Mayweather demolished Robert Guerrero in a 12-round bout which never felt close. He improved his career record to 44-0.

Sunday afternoon, the Northwestern Women’s Lacrosse team beat the Florida Gators in the ALC Conference Championship game. After the Gators clobbered the Wildcats 22-4 earlier this season, the 8-3 victory proved the previous game was an aberration.

It is fitting Mayweather and Northwestern lacrosse won decisive victories on the same weekend, seeing as their are similarities between the two.

First, both are dominant in their sports. Mayweather has never lost a fight, and Northwestern won eight of the last nine national championships. For about a decade, these two have been the unquestioned champions in their sport.

Also, they both put their sport on the map. How often would NCAA Division 1Women’s Lacrosse get national media attention if not for Northwestern’s incredible run? And Mayweather’s emergence on the pro boxing scene has reinvigorated the sport, which struggled tremendously in recent decades.

Perhaps the one area they can relate to the most is their detractors. Mayweather’s critics say his legacy will be tarnished for never agreeing to fight Manny Pacquiao. Pacquiao was/is the unanimous best contender, and Mayweather declined to fight him for years for various reasons, real or imaginary.

Likewise, many said Northwestern lacrosse has not faced a truly worthy opponent in the past nine years when they won their eight championships. They’ll say the great play of Maryland and Florida this season will prove too great for the Wildcats, and they will not come away with their ninth championship this year.

This weekend, I like to think both of them somewhat proved their critics wrong. Guerrero was a solid fighter who got embarrassed in the same ring as Mayweather. And Florida got beat from start to finish by a Northwestern team which looked almost nothing like the team that lost 22-4 just two weeks ago.

The difference between the two is Mayweather gets to pick his fights. Mayweather can avoid Pacquiao the rest of his career and only select fights he knows he’ll win. Northwestern can’t pick its battle. There’s only a certain number of teams they can play in season, and they have no control over who makes the NCAA Tournament. Northwestern can’t pick cupcakes and walk their way to a championship. They earn it.

Northwestern certainly earned their ALC Conference Championship. In their 8-3 win, they limited Florida to only nine shots in sixty minutes, won 10 out of the 13 draws, and only committed nine turnovers (compared to eight by Florida). It wasn’t a pretty game, not the high scoring shootouts Northwestern has become known for. But it was grind it out victory that led to a Northwestern W.

The Wildcats won’t get an easy route to a championship this season. They’ll almost certainly face UNC or Florida, both teams they lost to earlier this season, and appear to be on course to face an undefeated Maryland team in the NCAA Championship.

But therein lies the difference between Mayweather’s legacy and Northwestern lacrosse’s. Mayweather will be remembered as the guy who didn’t fight the giants of his sport. He took on Oscar de la Hoya when he was washed up. He refused to fight Manny Pacquiao. He won’t accept rematches against Juan Manuel Márquez or Sugar Shane Mosley.

Northwestern, on the other hand, will be remembered for taking on its sport’s titans and coming up victorious. Dominance isn’t all about wins and losses. If it was, we would all be talking about that one season Northwestern didn’t win the Championship. It’s about taking on the best and winning. That’s why LeBron James is looked down upon, for taking the easy path to a Ring, and why Mayweather won’t be respected in twenty years by boxing experts (truthfully, boxing may not even be a sport in the US in twenty years, but that’s a different story).

This will be an exciting NCAA Tournament. Northwestern’s been told all year they aren’t the favorites. But they just proved all those critics wrong with a victory over Florida.

Dominance isn’t about being told or telling yourself you’re the best. It’s about letting your play speak for itself. Northwestern needs to forget about the haters, and earn their victories this NCAA Tournament just as they have the last eight years.