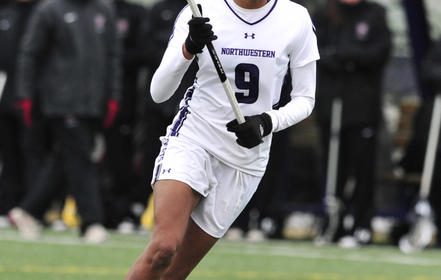 Sunday, in the second round of the 2013 NCAA Women’s Lacrosse tournament, Taylor Thornton lost her mind. The senior for the Wildcats dodged, ducked, dipped, dove and dodged her way to three goals while picking up four draw controls and causing three turnovers. Domination, thy name is that stat line. Thornton was a big part of Northwestern’s 15-8 victory over Stanford that propelled the two-time defending natty champs on to face Penn State next week.

Thornton is no stranger to the national spotlight. She was named the IWLCA Division I Defender of the Year as a sophomore and the Lacrosse Honda Sports Award Player of the Year as a junior. Now, she is a candidate for Sports Illustrated’s College Athlete of the Year. Is that a stretch? Not even close.

99: Thornton has caused 99 turnovers in her career.

This is the third highest total in Northwestern history, trailing only Christy Finch (183) and Alex Frank (107). Thornton’s presence on the Northwestern defense is similar to that of Taylor Lautner on the big screen: when you see her, you are sad, and you will probably run away.

On top of the 99 caused turnovers, Thornton has also picked up 172 ground balls in her career. This puts her third in school history in this category as well behind Finch again (183) and Ashley Koester (177), meaning Thornton has an outside chance at this record with as many as three games remaining in her time in purple. Just don’t ask me what constitutes a ground ball because I am a dumb.

88: Thornton has started all 88 games in her Northwestern career.

The last time the Northwestern Wildcats took the field without Thornton was May 24th, 2009, when the ‘Cats beat North Carolina 21-7 to claim their fifth consecutive championship. Since Thornton’s arrival, the Kelly Amonte Hiller’s squad has picked up two more national championships and accumulated an 80-8 record (.909 winning percentage). The team is 41-2 at Lakeside Field with Thornton in the line-up. Of course, there are plenty of talented seniors in this class (Erin Fitzgerald, Ali Cassera, Amanda Macaluso and Gabriella Flibotte among others), but Thornton is the only one to start every contest.

60: Thornton has combined to score 60 goals over the last two seasons with 33 as a junior and 27 as a senior.

“Maaaaan, we can’t give Taylor Thornton the Player of the Year award… she’s only a defender!” C’mon, son. After scoring 19 goals between her freshman and sophomore years, Thornton broke out offensively last year. She led the team with a .611 shot percentage last year and is second this year at .519 among players with double-digit goals. Thornton’s athleticism allows her to create her own shots out of nothing, a rare trait in lacrosse.

Thornton is lethal when given free position opportunities. In her four years, she has converted on 35 of 57 chances (61.4 percent). This year, she is 12 of 18; the rest of the team is a combined 50 of 114 (43.9 percent). This puts her somewhere between Pete Campbell falling down the stairs and Shawn and Gus fist bumps on the awesome scale. That’s saying a lot.

Thornton has also developed a propensity for scoring when the ‘Cats most desperately need her. Earlier this season against Ohio State, Thornton scored three consecutive goals to turn a 6-4 deficit into a 9-8 winner for the ‘Cats. Suck it, Buckeyes (yes, I linked to the same video twice in one column. I have a problem). Thornton came through again today as she twice reclaimed the momentum for Northwestern after Stanford goals.

Moving forward in the tourney, Thornton is obviously going to be a big key for the Wildcats. They will need her to step up again to knock off Penn State for a third time on the season after the Nittany Lions took the ‘Cats to overtime in the ALC tournament. Her elite athleticism, dynamic versatility and unparalleled play-making ability have earned her my vote for the best collegiate athlete of 2013.