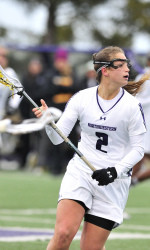 Northwestern will meet the Penn State Nittany Lions in the NCAA Quarterfinals on Friday for the right to play in the NCAA semifinals. So, you could say this is kind of a big game. Even more so this holds true for the Cats’ seven seniors as it will be there last game ever at Lakeside Field. The Cats have grown quite accustomed to the scent of the Nittany Lions. This will be the third meeting between the two teams.

At the first go-around, the Cats crushed them 11-3. But the second meeting in the ALC semifinal was a different story. If it were not for a Taylor Thornton- caused turnover in the last minute of regulation, the Cats would not be ALC champs. Northwestern won the game9-8 in overtime in a thriller of a game. That was the turning point, and easily the most defining moment of the Cats season thus far.

Penn State beat Canisius 14-13, and outlasted a tough Umass Amherst team 12-9 to get to this stage of the tourney. Northwestern, on the other hand, vanquished the Cardinals 15-8 and obliterated the top tier Gators 8-3 in the ALC final. Northwestern is by far the hottest team in Women’s lacrosse right now.

In the first meeting, Northwestern shut down second team All-American Kelly Lechner. In the second go-around, she notched three goals against the Cats. That can’t happen on Saturday. The Cats also need to neutralize Maggie McCormick like they did in the semifinal by holding her to 1 goal. She has 84 points on the year and can go off at anytime.

The matchup to watch for is first team All-American Erin Fitzgerald versus third team all-American Katue Guy of Penn State on defense. In game 2, she put the clamps on Fitzgerald allowing her to only score once. Northwestern needs to replicate what they did to Stanford in this game, which is holding them to under ten goals.

Another key is draw controls. Alyssa Leonard was brilliant against Stanford and Gabriella Flibotte even stepped up in the circle. The last time these teams met that was the only major statistic Northwestern won. This caused Northwestern to have 2 draw controls to Penn State’s 1 in overtime to seal the deal. Northwestern dominated the draws last game 18-6, causing seven different players to score, and enabled them to coast to victory.

There’s that woman again, Taylor Thornton, one of the five finalists for the Sports Illustrated College Athlete of the Year award. The girl exudes epicness with class. She’s a four- time IWLCA All-American. She fulfills whatever role her team needs her to play in order for her team to win. She’s the Lebron of this team. You can bet in her last home game she will go out with an emphatic bang.

Not only is Northwestern clicking at the right time, but they legitimately own Penn State. They’ve beaten the Nittany Lions 16 straight times dating back to 2004. They’ve won 9 straight home playoff games and get this: they are undefeated in home playoff games with Hiller at the helm.

Once Northwestern gets it going, a flurry of goals ensues. Multiple offensive players are stepping up, Bianco is playing lights out and the defense is stellar. Penn State doesn’t have the offensive firepower to stay with the Cats this time around; this is a new Cats team. That crowd Saturday will almost certainly be the largest this year. I just don’t see how Penn State can swing the pendulum hand of momentum in their favor. I predict a 13-8 trouncing of Penn State by the Cats. Then it’s off to the Final Four (if you will).