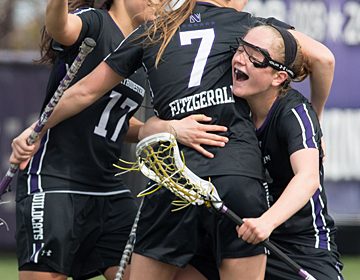 WNUR Sports Director Joe Misulonas (@jmisulonas) compares the end of Northwestern’s lacrosse season to the end of a TV series.

Last week, NBC aired the series finale of “The Office.” A beloved comedy show came to a sweet end which tied up all the character arcs and delivered the bittersweet moments fans expected for the final episode.

Series finales are the most important episodes a TV show will make. They can end on a high note, delivering a triumphant final scene which defines the show’s run, such as the M*A*S*H finale. Or they will end on a low note, a scene which delivers no conclusion for fans and leaves them despondent and bitter as their favorite show ends (See: The Sopranos).

Sports and Television are not too different. Both are entertainment which build up over the length of a season for the final show. In television it’s the season finale, and in sports it’s the Championship Game.

The thing which makes college sports different than pro sports is the athletes know when their series finales are going to air. You know you only have one more year to accomplish what you want when you enter your senior season. One last year to make your mark on the sport you play.

For the Northwestern Women’s Lacrosse team seniors, this week’s trip to the Final Four will be their series finale. They will have no last chance for redemption after this weekend. Win, and they go out on top of Women’s Lacrosse. Lose, and they will not. This is particularly noteworthy because the current crop of seniors (Beatrice Conley, Erin Fitzgerald, Taylor Thornton, Ali Cassera, Amanda Macaluso, Gabriella Flibotte, Alexa deLyra) are the only members of Northwestern’s team who remember a time Northwestern didn’t win a National Championship. Three years ago when they were freshmen, Northwestern lost in the Finals to Maryland, the only time in the last eight years they did not hoist the trophy at season’s end. They’re the only ones on this team who remember the awful feeling of losing in the National Championship feeling. They will not want to end their senior campaigns on a similar note.

Northwestern will certainly have the revenge factor going for them this weekend. This Friday, they’ll face North Carolina, one of only two teams to beat them this season. In Chapel Hill earlier this year, UNC took an early 7-1 lead, and held on to win 11-8. After the 7-1 lead, Northwestern outscored the Tar Heels seven to four. A flatfooted start gave them their first loss, and began the barrage of criticism saying this year would not be the Wildcats year. Already this month, they disposed of the other team to beat them this season, Florida, in the ALC Conference Championship Game. This is a team which likes to play with a chip on their shoulder. Add in a ton of postseason experience, and Northwestern seems to have the intangibles advantage heading into this Friday’s Semifinal matchup.

If they beat the Tar Heels, they’ll face the winner of Maryland versus Syracuse. Last year, Northwestern beat the Orange in the Finals. It would seem there would be no revenge factor if the two were to face off again. But last year, Syracuse coach Gary Gait and one of the team’s stars, Michelle Tumolo, were critical of officials after losing in the National Championship game. Northwestern may want to hand Syracuse another National Championship loss for suggesting Northwestern didn’t deserve to win it all last year.

The seniors on this Northwestern team don’t want to go home empty handed. They’ve been there before, and they know it sucks. They’ll head into this weekend with a little more swagger than in years past.

After all, you don’t want to end your series on a bad note (Just ask Jerry Seinfeld).