What If? Too much of a good thing 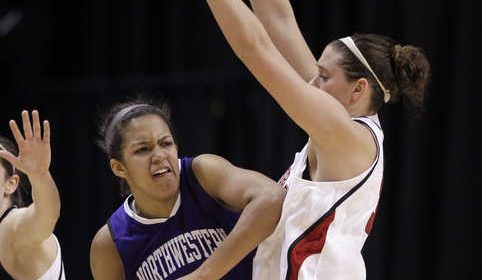 There’s plenty of reason for optimism, though. The other three returning starters from this year’s team were all underclassmen, including Big Ten Freshman of the Year winner Maggie Lyon. Lyon and Lauren Douglas will be sophomores next season and point guard Karly Roser will be a junior who has started every game of her career so far.

Throw in the fact that Northwestern has the highest-ranked incoming recruiting class in the Big Ten for 2013, and this team’s potential is enormous. The star of the incoming freshmen is Nia Coffey, a 6’ 1” forward from Minneapolis. Coffey was a McDonald’s All-American this season and snagged 6 rebounds in just 15 minutes in the All-American game. This summer, Coffey will represent the United States in the FIBA U-19 Championship in Lithuania.

Coffey is not the only Northwestern signee who appeared on the ESPN Top 100 for the class of 2013. 5’ 9” Guard Christen Inman brings a great motor and defensive presence to the Wildcats, who lacked depth at guard this season, often playing Karly Roser the full 40 minutes.

For those of you scoring at home, next year’s team will have two returning starters who will be sophomores, a junior point guard who’s never missed a start and can play the full 40 minutes, and the best incoming players of any team in the Big Ten in Coffey and Inman. Rising junior Alex Cohen projects to be the starting center after two productive seasons of backing up Diamant.

Jones was a freshman at Northwestern in 2011-2012, but transferred to Florida State after just one season with the Wildcats. She was the most heralded recruit in Northwestern women’s basketball history: a 6’2” wing player who was the #11 recruit in the nation in 2011, according to ESPN. Jones was a starter from day one at Northwestern, and, at first glance, had a pretty good freshman campaign.

She was second on the team in most statistical categories, including minutes, points, rebounds, assists and steals. She was named to the Big Ten All-Freshman team in 2012.

But Jones wasn’t perfect, either. Morgan Jones struggled in her one season at Northwestern.
Michael Conroy — ASSOCIATED PRESS

She had the most shot attempts and three-point attempts on the team as a freshman, but her shots rarely found the net. She shot a team-worst 31.5% from the floor and struggled from downtown, connecting on just 27.6% from long range.

But what if Morgan Jones never decided to transfer, and was now preparing for her third season as a starter for the Wildcats?

For starters, let’s assume that she was healthy in 2012-2013 and started in the spot that 6’2” Lauren Douglas filled as a freshman this year. Let’s start by comparing the numbers from Douglas as a freshman to Jones’s freshman stats, and keep in mind that Jones would have likely improved in pretty much every category as a hypothetical sophomore in 2012-2013.

Douglas was a more efficient scorer for Northwestern; the difference in points per game is not important when you factor in the sheer difference in number of attempts. Jones handled the ball more than Douglas did, and Jones had the better assist-to-turnover ratio as a freshman. However, the biggest difference is on defense. Despite the fact that the two players are the same height, Douglas swatted more than five times as many shots as Jones did!

Now, taking into account how a Douglas-for-Jones swap would affect other Northwestern players, it becomes even more clear that the Wildcats were no worse off with Douglas in 2012-2013. In terms of rebounds, part of the difference between Douglas and Jones can be attributed to the fact that Diamant gobbled up more than one additional rebound per game as a senior in 2013 than she did the year before. In addition, one extra forward on the roster would have probably meant fewer minutes off the bench for Alex Cohen, and certainly no lineups that featured both Diamant and Cohen in 2013.

On the offensive side of the ball, Maggie Lyon would not have had her breakout freshman season if Jones was out there demanding her 14 shots per game. Lyon, who was second on this year’s team with 12.6 points per game, did it on about 12 shot attempts per game, shooting 39.5% from the field and 35.1% from the three-point line. From an efficiency standpoint, Jones would have had to improve a lot from year one to year two to match those splits.

Moving forward, how would Northwestern incorporate Nia Coffey with Jones and Douglas already in place? Instead of Coffey being able to come in and fill the starting role left by Kendall Hackney, the Wildcats would have three different athletic, 6’2” forwards competing for two starting spots. That is, of course, assuming Coffey would still be interested in coming to Northwestern. Similar to the problem of there not being enough shot attempts to go around if Jones was on the 2013 team, there wouldn’t be enough minutes for everyone on the 2014 team.

There are plenty of arguments as to why the team would be better off with Jones still around. Sure, you never want to see a five-star player leave your school after one year. Yes, it’s generally better to have more years of starting experience than fewer. (Hypothetically, Roser and Jones as third-year starters, Lyon as a second year starter; Douglas/Coffey and Cohen as first-year starters has more years of total experience than next year’s probable lineup of Roser, Lyon, Douglas, Coffey and Cohen.)

But what if Morgan Jones doesn’t improve that much from year one to two? What if she continues to take most of the shots, but her field goal percentage improves just slightly, due to fewer long-range attempts with Lyon on the floor? What if she had other flaws that were covered by playing with Hackney and Diamant for two seasons, flaws that would be revealed in 2013-2014?

Yeah, it’s hard to swallow the transfer of a five-star recruit, a player with so much potential. But the Wildcats without Jones won more conference games than they did with her, and her departure means that Northwestern fans got to see the future earlier and more often. And the fact is: that future is pretty darn bright.

Read prior “What If” columns here.