Posted on June 19, 2013 by Cameron Songer Leave a comment 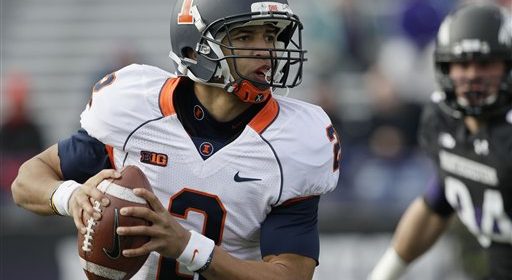 Before the 2013 college football season kicks off, WNUR Sports will bring you coverage of Northwestern and the rest of the Big Ten. Today, WNUR Sports Online Content Director Cameron Songer (@CameronSonger) breaks down the Illinois Fighting Illini.

The good news for Illinois football? A lot of the team’s offensive production returns, and this season can’t be much worse than last season. The bad news? Last season was awful and all signs point to another disappointing season for the Fighting Illini.

In his first season in Champaign, Tim Beckman led his team to a woeful 2-10 record, with no wins in the Big Ten. Fans could see a silver lining if some of those losses were close, but the Illini only lost one game by fewer than 14 points. In other words, Illinois wasn’t just the worst team in the Big Ten, they were clearly way behind the pack.

The biggest storyline for Illinois at the start of the 2013 season is the fact that the coaching staff has five new assistants: the team brings a new offensive coordinator and coaches for quarterbacks, receivers, offensive line, defensive line and linebackers. Last season, Illinois finished last in the Big Ten in scoring and total offense, but the Illini’s offense, which returns nine starters, should be one of the team’s strengths. Senior quarterback Nathan Scheelhaase has shown flashes of brilliance and has started since his freshman year, but injuries (he missed two games last year) and declining talent around him have diminished his numbers. He’s a dual-threat quarterback in an offense that struggled with the run last year. He led Illinois with four rushing touchdowns and passed for four more.

Offensively, all of the team’s relevant running backs and receivers return from last year’s squad, but this means less than normal when you factor in a new offensive coordinator. There are a lot of seniors, but this might be a bad thing for Illinois. This team is in a major rebuilding era, and Tim Beckman needs to find the right balance of building his younger players’ confidence via extra reps against saving face by remaining as competitive as possible now.

Defensively, Illinois finished last in the Big Ten in scoring defense, surrendering more than 32 points per game. Only three starters return on that side of the ball, led by senior linebacker Jonathan Brown. Brown missed the last three games of last season with an injury, but his return alongside Mason Monheim gives the Illini a pair of solid linebackers. The rest of the defense is not in such good shape. The line is undersized and inexperienced, meaning opposing quarterbacks will have time to pick apart a secondary with just one returning player with any meaningful experience. I predict that opposing quarterbacks have their game against Illinois circled on their calendars as opportunities to put up big numbers against a weak secondary.

Special teams will be key for Illinois to stay in close games. If the offense struggles as much as it did last year, punter Justin DuVernois will have to continue to average about 42 yards per punt to keep field position favorable. Kicking duties were split almost evenly last year between Taylor Zalewski and Nick Immekus, a sophomore and junior in 2013, respectively. Zalewski should be the primary kicker this year. He has greater range and his accuracy should improve in year two. If the defense somehow keeps the Illini in a game, every point is going to matter, and every opportunity for a win is valuable for Illinois this year.

The schedule for the Fighting Illini this year is very similar to last year’s. The nonconference slate includes an FCS opponent and a MAC opponent at home. The other two nonconference games are both at home against BCS-conference schools that played in bowls last year. In conference, Illinois hosts Wisconsin, Michigan State, Ohio State and Northwestern. They travel to Nebraska, Indiana, Penn State and Purdue.

Compared to last year, this lineup is even less conducive to stealing a conference win. The cross-divisional opponents switch from Michigan and Minnesota to Nebraska and Michigan State. Illinois came closest to beating Purdue last year— a 20-17 win for the Boilermakers— but that game was in Champaign.

I don’t think this team is capable of doing better than a 2-2 mark out of conference. Wins against SIU and Miami (Ohio) are likely, but Washington and Cincinnati are both good teams. On paper, the Illini should again go winless in conference. There’s no game in the Big Ten that Illinois fans should feel really confident about. With that being said, they could conceivably win at Penn State, Indiana or Purdue or possibly at home against Michigan State or rival Northwestern.

I think Illinois manages one conference upset win (as long as it doesn’t happen against Northwestern, it helps the Wildcats). In the big picture, though, the fact that a four-win season would appear to be a monumental success shows just how far away this team is from being nationally relevant. Two or three wins is much more realistic.