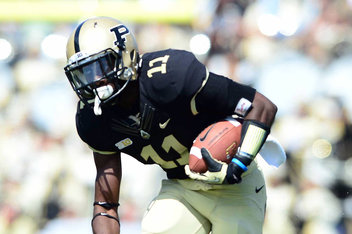 In our second Big Ten team profile, Josh Walfish (@JoshWalfish) looks at the Purdue Boilermakers and their outlook for the 2013 football season.

This is the second of our previews of non-Northwestern Big Ten teams for the summer. Click here> to view our preview of the Illinois Fighting Illini.

A new coach means there is new found hope in West Lafayette for 2013. Danny Hope did not do enough to save his job after a 6-6 season and losing in embarrassing fashion in the Heart of Dallas Bowl under an interim coach didn’t help matters. Needless to say, it was time for a new face for Purdue football.
The new era of the Boilermakers began this spring under Darrell Hazell, the former Kent State coach. Hazell has brought a new energy to West Lafayette, but there is a lot of work still to be done for Purdue to become relevant again.

Offense: Could this be the year Rob Henry finally takes the bull by its horns and control the top signal caller job? The senior has some competition from true freshman Danny Etling, but Henry has a lot more experience and is way more mobile. The quarterback will be the most important position on the field for the Boilermakers given their schedule and lack of talent at other skill positions.

Where the Boilermakers do have talent is in the backfield with a pair of excellent running backs. Junior Akeem Hunt is the quick explosive back who can be used in both the passing and running game. His classmate, Brandon Cottom, is the more bruising back who is more capable of taking the beating inside the tackles. It is a very similar situation Hazell had at Kent State last season when he took the Golden Flashes to an 11-3 record. Purdue also returns three starting offensive lineman from last season which should help to get the running game going early in the season. There will be a lot of youth on the interior of the line with a sophomore Robert Kugler transitioning from guard to center and redshirt freshmen likely to hold down both guard spots. The tackles will both be seniors which should help in the pass blocking, but it will take some time for the whole line to gel with three players at new positions.

The mess at wide receiver is an issue for the Boilermakers, who need some sort of vertical attack to complement the ground game. Senior Gary Bush returns to the unit, but Purdue loses its leading receiver, senior O.J. Ross, who was suspended indefinitely from the team in February. There are not many other experienced options to complement Bush, with a lot of size and youth making up the remainder of the roster. The potential is there, but the lack of experience is an issue.

Defense: The good news for Purdue is it returns nine starters on defense including three defensive linemen. The issue of course is the defensive lineman it lost was All-Big Ten defensive tackle Kawann Short who ate up blockers and was a run-stuffer. Junior Ryan Russell will be the big playmaker off the end and will be supplemented on the other side by either senior Greg Latta, who missed the spring due to injury, or junior Jalani Phillips, who took most of the first team snaps in the spring. The defensive tackles will likely be filled by committee including seniors Bruce Gaston and Ryan Isaac, who started last season for the Boilermakers.

All three projected starting linebackers played significant minutes last season, which is excellent news for the Boilermakers. Junior Joe Gilliam will hold down the middle, flanked by seniors Will Lucas and Sean Robinson on the outside. Lucas had 66 tackles a year ago and will likely be the statistical leader of the group again this year. Robinson is a converted quarterback and Purdue is banking on him using that experience to diagnose plays and be a major disruption during his senior campaign.
The best player returning for Purdue on defense is senior Ricardo Allen, who was an All-Big Ten cornerback a year ago. The secondary could be one of the best in the Big Ten this season with Allen and the two starting safeties, juniors Landon Feichter and Taylor Richards, returning to West Lafayette. Teams will try and pick on the other cornerback, whether it be sophomore Frankie Williams or senior Normondo Harris.

Special Teams: The Boilermakers will rely heavily on senior punter Cody Webster to pin teams deep in their own territory. Last season Webster averaged 42.3 yards per punt and pinned 29 kicks inside the 20-yard line. He only had seven touchbacks, impressive for his 70 punts overall last season.
Who will kick for Purdue is an entirely different issue. There are four kickers on the roster and three of them saw action last season. Sophomore Thomas Meadows handled the kickoff duties and he should do the same this year. Sophomores Paul Giggs and Sam McCartney split the field goal kicking duty and neither of them was all too impressive. The pair combined to go 9-for-14 in field goal attempts and 44-of-49 on PATs.
Special teams is the unit that can decide a close game and Purdue is certainly in trouble if the game comes down to the foot of its kicker.

Prediction: Purdue has one of the tougher non-conference schedules in the Big Ten taking on two teams that played in a BCS bowl a year ago, Notre Dame and Northern Illinois, and Cincinnati, a member of the new American Athletic Conference. A home game against Indiana State will be the only easy win on the list. As for the conference slate, the Boilermakers will take on Nebraska, Michigan State and Iowa in cross-division games, a difficult slate with two of the top-four teams from the Legends Division. Add in the fact they have to play Ohio State, Penn State and Wisconsin this season and it will be tough to get to bowl eligibility. If everything comes together the Boilermakers could flirt with a bowl bid, but I’m not seeing it given the schedule.
4-8 (2-6 Big Ten)