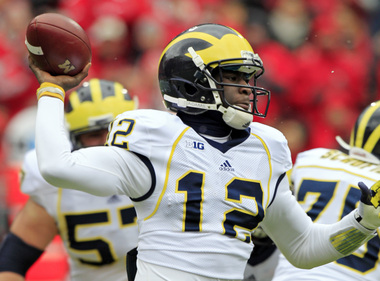 Last season was a good news, bad news season for Michigan fans. The good news was Brady Hoke had successfully eliminated all remnants of the Rich Rodriguez era, following up a season that culminated in a Sugar Bowl victory with an appearance in the New Year’s Day Outback Bowl. Even though Michigan ultimately lost that game (Thanks in large part to Jadaveon Clowney going beast mode all over Vincent Smith), the program has been to bowl games each of the last 3 seasons after not doing so the two seasons prior. However, at Michigan, making bowl games is simply not good enough, and the failure to return the program to its former glory could eventually cost Hoke his job. This will prove to be a make or break year for the Michigan Wolverines that could set them up for years of glory, or years in the middle of the Big Ten.

“Michigan’s potent offense will again be led by Denard Robinson.” That is how many Michigan previews have begun in the past. However, his graduation means that junior Devin Gardner will be the unquestioned starting QB coming into the season. Gardner proved he was capable last season after taking over the job (1,219 yards & 11 TDs in 5 games), and alongside fellow seniors RB Fitzgerald Toussaint and WR Jeremy Gallon, he should keep the Michigan offense as productive as it was a year ago. Oh, and just  to make their Big Ten opponents a little more nervous, Gardner successfully obtained a medical hardship waiver for the 2010 season so he has not one but TWO years of eligibility left. Undoubtedly, Michigan’s biggest concern coming into the season on the offensive side is their lack of experience on the offensive line. Senior OT Taylor Lewan is the anchor at left tackle and will sure be a high pick in the 2014 NFL draft; however Michigan will need to replace 3 starters on the line due to graduation (OGs Ricky Barnum and Elliott Mealer and C Patrick Omameh). With a running game that relied heavily on Denard Robinson scrambling out of the pocket, the health of Michigan’s offense will depend highly on the ability of those 3 new starters to perform and perform well.

While the offense has one glaring area of need, the defense does not. Of the 6 starters that return from last year, two are linemen, two are linebackers and two are defensive backs. The defense that finished 2012 in the top 20 in yards and points allowed will be led by junior linebacker Jake Ryan who (barring injury) should be in the discussion for the Butkus award. Likely alongside Ryan will be junior Desmond Morgan and sophomore James Ross. The three will make up Michigan’s most talented unit and should provide excellent run defense as well as above average pass support. Michigan’s deepest unit however is their secondary. Returning is 3-year starting FS Thomas Gordan as well as junior CB Raymon Taylor. However, all of 2012’s reserves are returning with senior Courtney Avery and junior Marvin Robinson taking over the vacant spots at CB and SS respectively.  The defensive line returns two starters on the strong side with DT Quinton Washington and DE Brennen Beyer coming back for their senior and junior seasons respectively. The weak side will see a lot of competition with as many as 5 players (including 2013 early enrollee Taco Charlton) with potential to earn a starting job. Yes, you read that right. Michigan is going to have a guy on their team named TACO! T-A-C-O!!!!! Let the Taco Bell jokes begin Big Ten.

The most interesting development with specials is what will become of the 2012 punter of the Year, Will Hagerup. After averaging 45 yards per punt, Hagerup was suspended for the Outback Bowl for a violation of team rules. Hoke has yet to say whether or not the punter will remain on the team or play in the team’s season opener against Central Michigan. If Hagerup comes back, the job is his. If not, the punting duties will be passed on the placekicker and long field goal specialist Matt Wile. Brendan Gibbons will be the team’s primary field goal kicker after making 27 of 33 FGAs over the last two seasons. The speedy Dennis Norfleet will be the kick returner while Gallon, the crafty vet, will resume his duties as punt returner.

The biggest question for Michigan is whether their offensive line will be ready to lead Hoke, Gardner and the Wolverine nation to their much overdue glory. However, the schedule makers did their best to make Michigan’s season as difficult as possible with 5 straight games in November against teams that went a combined 43-21 (25-15) in 2012. I expect they will lose at least 2 of those games (here’s hoping one is against NU), with games against Notre Dame and Penn State as the only real stumbling blocks separating Michigan from a 10 win season and a potential berth in the Big Ten Championship game. The Notre Dame game has the potential to completely tell the story of the season to come, for better or for worse. A win under the lights of the Big House will propel Michigan to glory and maybe even set Gardner up for a Heisman campaign. Michigan’s defense will be elite all year and they should hold most opponents to 21 points or fewer. As long as the offensive line is up to it, the Wolverines offense will get that and a lot more with every game.