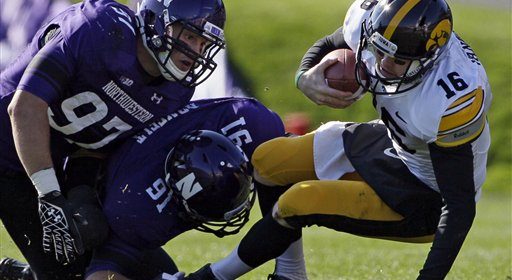 Our Josh Walfish (@JoshWalfish) looks at the key players returning on the D-Line for the Wildcats and the strength of the overall unit.

If Northwestern wants to replicate its success from a year ago, it will be the defensive line who leads the way.

It was the front four which allowed the linebackers to make big plays last season and lead the Wildcats to the third-best rush defense in the Big Ten. It was the line which contributed 20.5 of NU’s 28 sacks a year ago led by Tyler Scott’s nine takedowns, the most in the Big Ten a year ago.

Scott will return to anchor a defense trying to prove last season was not a fluke. Although he will get all the preseason attention – and rightfully so – he is surrounded by some of the best talent NU has had in the trenches.

The strength of this unit is the ends with four linemen who have the motor to chase the quarterback and wreak havoc in the backfield.

Scott is poised to eclipse double digit sacks for the first time in his career after being fully healthy last season and coming close to that mark. He also forced three fumbles a year ago to go along with five pass deflections on the line. His 42 tackles was good enough for sixth on the team, but more impressive was his team-high 12.5 tackles-for-loss in 2012.

However, if teams focus too much on Scott there are three speed demons waiting to take their shots at the quarterback. Dean Lowry appeared in all 13 games in 2012 and picked up only a single sack, but he had three tackles-for-loss amongst his 14 total stops. He showed a lot of potential during his true freshman campaign and looked good in spring practices. Having a full spring and summer to fill out his frame and improve his game should allow him to make the jump to another level and avoid the sophomore slump.

Lowry will be challenged by redshirt sophomore Deonte Gibson who had two sacks last season. Nobody can question Gibson’s toughness after missing only a single game with a dislocated elbow and his speed was evident by his ability to get to the quarterback and disrupt plays even though it doesn’t show up in the stat book.

The wildcard of the group is redshirt freshman Ifeadi Odenigbo, who is still a bit small for the line. The shoulder injury last season limited his ability to bulk up, but if he can add 20-30 pounds of muscle in the weight room over the offseason, he can be a threat on the line for the Cats.

The only other returning starter on the defensive line for NU is junior Sean McEvilly, who was overshadowed a bit by Brian Arnfelt on the interior last year. McEvilly only had 20 tackles last season, only 1.5 of which went for a loss. He will be the key contributor in the middle of the defensive line and will need to become more of a run stopper while not losing the athleticism that made him valuable last year.

The battle for the other spot on the interior will be fierce between junior Chance Carter and senior Will Hampton. Both are big bodies who can help stuff the run with Carter being a bit more athletic as seen in the spring game two years ago when he returned an interception for a touchdown. There will be a constant rotation at that spot on the line and both will get plenty of playing time in 2013. The big issue with these guys is if one can seize control of the spot from the other like McEvilly did last season. Both have the skills, but 17 of their 24 combined tackles last season were assisted, so they both must find a way to make more individual plays in the backfield.

On the interior the mystery is redshirt sophomore C.J. Robbins. He has yet to see the field for the purple and white, but he impressed many coaches including Pat Fitzgerald during spring practice. He will definitely be in the mix in the fall and could be a breakout star in the years to come. Robbins is a big body and is an early projection to be the best newcomer on defense.

It may sound crazy, but NU’s defensive line may be better this year than it was last season. Losing Quentin Williams and Brian Arnfelt was big, but now more than any time before, the talent is there to replace the veterans. If Scott can repeat his performance from last season, the other three defensive ends can more than replace Williams’ production from 2012. McEvilly should improve after getting 10 starts under his belt last season. Carter and Hampton should improve as they push for the other starting spot and Robbins could make a big impact with his fresh legs.