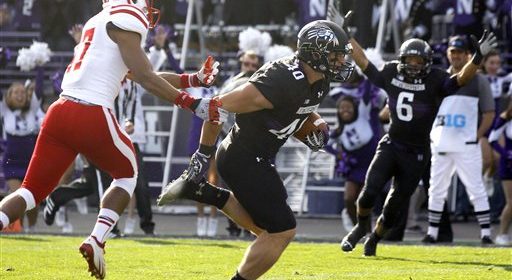 Northwestern’s offense has been getting fans excited each of the last three years, and that doesn’t change this season. The Wildcats lost very few starters on either side of the ball from last year’s 10-win, Gator Bowl Champion team. The offense returns 1,000-plus-yard rusher Venric Mark, competing-yet-complementing quarterback tandem Kain Colter and Trevor Siemian, as well as a bevy of weapons out wide which includes Christian Jones, Rashad Lawrence, Tony Jones and former five-star recruit Kyle Prater, which means offensive coordinator Mick McCall and company should hit the ground running when the ‘Cats kick off against California in August. However, one key cog to the dangerous passing attack that often gets overlooked might be the biggest difference-maker this season: the superback position, namely Dan Vitale. What was thought of to be the offense’s weakness entering last season could very well be a strength entering this campaign.

Let’s paint a picture: Drake Dunsmore – who finished the season second on the team in catches, receiving yards and receiving touchdowns (behind only Jeremy Ebert), and who also was a consensus first-team all-Big Ten selection at tight end, taking home the inaugural Big Ten Kwalick-Clark Tight End of the Year award – graduates and is selected in the 7th round of the NFL Draft by the Tampa Bay Buccaneers. To top off his absence from the superback rotation, zero superbacks had any collegiate experience at the position entering the season, with a few not even playing the position in high school. Mark Szott had redshirted and looked like the only returning player qualified to fill Dunsmore’s role. Brian Smith was a converted offensive lineman and would go on to only play in goal line and short-yardage situations after Jack Konopka moved into the starting right tackle role. Tim Riley was a converted linebacker, and went on to fulfill the fullback duties left behind by Aaron Nagel. Evan Watkins was a converted quarterback, and no one knew what to expect from him. The situation looked bleak. Other than those guys, a couple of freshmen joined the ‘Cats, but almost no freshmen play under head coach Pat Fitzgerald. Almost.

Enter true freshman Dan Vitale, who went on to become the starter in the season opener versus Syracuse and never looked back, getting more comfortable and becoming more productive as the season wore on. He broke out against Michigan State, hauling in nine catches for 110 yards. To put that performance in perspective, Dunsmore had only 11 catches for 141 yards his entire true freshman season, and did not have a 100-yard game until the Outback Bowl in his redshirt sophomore season. To cap his remarkable first season off, Vitale had seven catches for 82 yards in Northwestern’s Gator Bowl victory. Vitale will look to expand on his freshman coming-out party, where he finished with 28 catches for 288 yards and two touchdowns, working with the dynamic duo of Colter and Siemian for one more season. I think fans can expect 500-600 yards from Vitale this season, even if one of the committee of receivers breaks out for a huge season (I’m looking at you Christian Jones and/or Cameron Dickerson). Venric Mark’s explosive running style and playmaking abilities are especially conducive to play actions and other superback-friendly routes.

What could be just as important as Vitale’s role in the superback rotation are the blocking roles from this position group – that is, the in-line tight end and fullback roles. Gone are Brian Smith and Tim Riley, meaning there are two vacant spots prime for the taking. Szott played the in-line role early last season before tackle Paul Jorgensen lined up opposite Smith last year in that position. With another full offseason, I can see him reclaiming that role, or even playing the fullback position. One newcomer I’m excited to see take the field is Jack Schwaba. I see Schwaba playing the in-line tight end role, considering he was predominately a blocking tight end in high school. I’ve seen him in person, and he looks much bigger than his listed measurements of 6’4” 225 pounds, and has the frame to add more weight to endure the Big Ten season.

Only one recruit from the 2013 class, Jayme Taylor, is a superback, and if we learned anything last year it’s to not count out a freshman from seeing the field, especially at the superback position, which has a history of playing true freshmen (Brendan Mitchell, Josh Rooks, Dunsmore and Vitale in recent history). However, Taylor has more of an uphill climb because he is more of a pass-catcher than a blocker, and must compete with a more established Vitale to see the field in the pass-catching role. But Fitz loves and encourages competition, so anything can happen on this front. Overall, the superback position definitely offers more answers than questions, something that could not be said about this group last year.