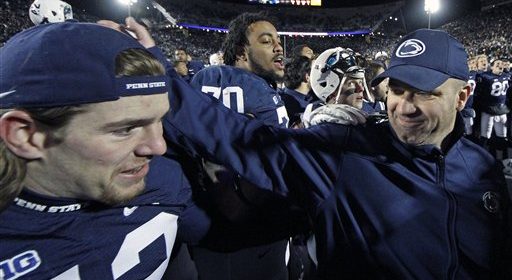 Penn State’s 2012 season was the feel-good story of the year in the Big Ten. As we all know by now, the NCAA stripped Penn State of future scholarships, in addition to handing down a 4-year postseason ban and allowing players to transfer out without having to sit out a year. As a result, 12 players transferred out, most notably RB Silas Redd (ran for 1241 yards and 7 touchdowns the previous year), WR Justin Brown (leading returning receiver), QB Rob Bolden (who was expected to push a struggling Matt McGloin for the starting spot) and starting K/P Anthony Fera. So as you can see, the deck was stacked for new head coach Bill O’Brien.

But this did not faze O’Brien, who came in with a great pedigree as the former Offensive Coordinator and Quarterbacks Coach of the New England Patriots, leading the Nittany Lions to a surprising 8-4 record (6-2 in Big Ten play). O’Brien would go on to capture the coaches’ and media’s Big Ten coach of the year awards, as well as the Paul “Bear” Bryant Award, given to the national coach of the year.

A repeat performance of the 2012 season will be an uphill climb as Penn State enters year two of the Bill O’Brien era, losing several key players and All-Big Ten performers in the offseason to graduation. But after turning down the Philadelphia Eagles and Cleveland Browns head coaching jobs, it seems as if O’Brien is already aware of a Penn State football tradition: they don’t rebuild, they reload (especially defensively).

If you would have told me at the beginning of last season that Matt McGloin would end the season as the Big Ten’s leader in passing yards and touchdowns, I would have thought you were crazy. I guess working with a coach who coached a pretty good quarterback by the name of Tom Brady goes a long way in a young quarterback’s progression, as McGloin did just that, tossing the rock for 3,266 yards and 24 touchdowns, while throwing only 5 interceptions. Unfortunately for Penn State, O’Brien and company have to find a new quarterback to fill the shoes of the Honorable Mention All-Big Ten gunslinger.

It’s looking like the job is a two-horse race between junior college transfer Tyler Ferguson and true freshman and five-star recruit Christian Hackenberg. Ferguson comes from the College of Sequoias, where he threw for 2,614 yards and 22 touchdowns. Hackenberg was the number 2 drop-back quarterback recruit in the country, and the 24th overall recruit. Neither has seen the big and bad defenses of the Big Ten, but they will have targets to throw to.

Consensus 1st team All-Big Ten Wide Receiver and Richter-Howard Receiver of the Year Award winner Allen Robinson returns, and will be relied upon to build on his 1,013-yard, 11 touchdown campaign last year, as he will be the number one target for whoever wins the quarterback position battle. Complementing Robinson will be WRs Kyle Carter and Brandon Moseby-Felder. They finished second and third, respectively in receiving yards, with Carter hauling in 36 catches for 453 yards, and Moseby-Felder chipping in with 31 catches and 437 yards. Gigantic tight end Jesse James (6’7” 249 lbs) will look to have an expanded role in O’Brien’s pass-happy offense, as he finished last season with five receiving touchdowns, good for second on the team. Look for James to continue being the red zone threat and security blanket for the fresh face at quarterback.

The rushing attack will be nothing to sneeze at either. Zach Zwinak returns after a breakout 1,000-yard campaign where he bullied his way for six touchdowns on almost five yards per carry. While it was no Silas Redd-esque year from a production standpoint, Zwinak did his job keeping opposing defenses honest while also protecting McGloin on 3rd downs. He could have a tougher time this year after coaches’ 1st Team All-Big Ten Center Matt Stankiewitch graduated. The now-New England Patriot’s departure will make life tougher for Zwinak, but he still gets to run behind coaches’ 1st Team All-Big Ten Guard John Urschel. Overall, Penn State’s quarterback situation looks suspect for the time being, but whoever wins out will defer to many already-productive veterans.

This is the side of the ball O’Brien is going to have to hope reloads, instead of taking a step back. The veteran-loaded defense of 2012 was about as good as it got in the conference, finishing second in scoring defense (allowed only 19.1 points per game) and fourth in total defense (356.3 yards allowed per game). Gone are linebacking legends in Michael Mauti (consensus 1st team all-conference; Butkus-Fitzgerald LB of the Year) and Gerald Hodges (2nd team all-conference, led team in tackles with 109 total). Defensive Tackle and consensus 1st team all-conference performer Jordan Hill is also gone. Losing that many all-conference performers cripples most defenses, but Penn State isn’t most defenses.

They’re not called “Linebacker U” for no reason. Even after losing Mauti and Hodges, who were unquestionably the heart and soul of the defense, the linebacking corps might unbelievably still be the strongest unit on the defense. Returning starter Glenn Carson returns after a strong season last year (3rd on the team in tackles with 85), and will need to step up even more for this defense to move forward without a hitch. Same goes for Mike Hull, who rotated in often and finished the season with 58 tackles. On the defensive line, look for a strong sophomore season from DE Deion Barnes (10 TFL, 6 sacks), who was last season’s winner of the Thompson-Randle-El Freshman of the Year.

If there was a weak spot on the Nittany Lion defense last year, it was the secondary. The unit finished eighth in passing defense last year, giving up 226.2 yards per game. Cornerback Stephon Morris graduated, but the defensive backfield will return three of four starters. CB Adrian Amos will look to improve upon his two-interception performance from last year. Safeties Malcolm Willis and Stephen Obeng-Agyapong finished with 45 and 41 tackles, respectively, but recorded zero interceptions total. They will need to be more active in the passing game to catapult the secondary from the defense’s weakness to potentially a strength.

This was one side of the ball that was particularly affected by a player who transferred out of Happy Valley. Kicker/punter Anthony Fera came off a solid freshman season (14-17 field goals, 42 yards per punt in 2011), where he was a Lou Groza Award finalist. Going in as the unquestioned starter for both kicker and punter, Fera decided to transfer back home to Texas after the Sandusky fallout. What followed was a very ugly season, particularly in the placekicking department.

Sam Ficken assumed field goal duties, but was unable to convert on many of his chances. He went 14 for 21 in his field goal opportunities, including a surreal one-for-five effort versus Virginia, which likely cost them the game. Punting went a little better for Penn State, as Alex Butterworth averaged 37.4 yards per punt, but that was still the worst average in the Big Ten.

Even after losing stars on both sides of the ball, I can’t see the Nittany Lions dropping any of their non-conference slate. If this were last year, I could see Syracuse pulling off the neutral site win, but their departures (including head coach Doug Marrone) will leave the Orange in flux for a while. I also don’t see Penn State losing to teams they should beat in Big Ten play (Indiana, Illinois, Minnesota, Purdue). However, where this team will differ from teams from the past, I do not see them being competitive against the upper-echelon Big Ten teams. In years past, you could not chalk up a given game on Penn State’s schedule as a loss. However, the loss of McGloin, Mauti and Hodges will prove too much to overcome. An 8-4 (4-4) record is nothing to be ashamed about, as I see Penn State taking a step back in conference play.