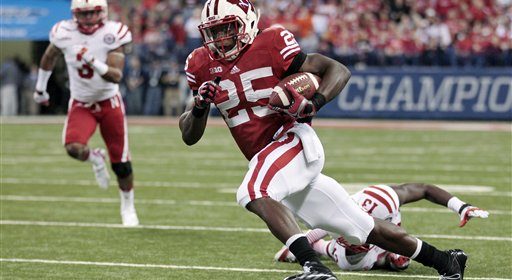 0-3. That’s Wisconsin’s record the last three years in Rose Bowl games. So although they’re surely the team to beat in the Big Ten still, you can bet their players are more determined than ever to finally pull out a victory in Pasadena come January 1st. However, the big headline in Madison this off-season has been Gary Andersen and their new coaching staff who took over for Brett Bielema when he surprisingly left for the vacant head coaching job at Arkansas. Despite Bielema’s abrupt and controversial departure, Badger fans seem to have mostly moved on at this point and are excited to see what Andersen brings to the table, having averaged 34.9 points per game, last year leading an 11-2 Utah State team. According to local beat writers he’s already made a strong first impression by being very player-friendly (they frequently have dance-offs at practice), emphasizing trust, and retaining multiple Wisconsin coaches for his new staff. But with one of the softest overall schedules in the Big Ten (their three hardest games are Arizona St. on the road, Ohio St. on the road, and Northwestern at home) expectations remain high in Madison. In fact, 12 starters will be returning for the Badgers (six on each side of the ball), including every single pass catcher. Despite coming off an 8-6 season (4-4 in the Big Ten), teams can’t overlook Wisconsin as four of their losses were by only 3 points. Northwestern will have a tough task when they visit Camp Randall Stadium on October 12th as the Badgers have a 57-7 at home over the last nine years and will be coming off a bye week.

Wisconsin has always been known for its offense and that won’t change this year. The Badgers are expected to run a variant of Utah State’s run-based spread offense. Even though Monte Ball has now graduated to the NFL, The running backs will remain the key to the Badger offense successfully driving down the field, as other offensive positions remain question marks. However under Andersen’s system don’t be surprised to see James White and Melvin Gordon split out wide at times, while there are also sure to be plenty of three tight-end looks and pre-snap motion. While White is the expected to begin the year as the starter, don’t be surprised if redshirt sophomore Gordon gets a significant number of carries, as he’s been hyped up all offseason following his 216 yards on only nine carries in the Big Ten Championship game. Fans were initially skeptical of any sort of “spread” offense, but now there seems to be a consensus that a multiple-tight end scheme that still relies on the run could be very effective.

One of the biggest question marks for the Badgers is at quarterback. There are a handful of guys still competing for the starting job, including passer Joel Stave, the athletic Curt Phillips (who started in the Rose Bowl last year), incoming transfer Tanner McEvoy, veteran Danny O’Brien, and redshirt freshman Bart Houston. While Stave and Phillips appear to be the early front runners to win the job, both have been plagued by injuries in the past. Luckily, with so many diverse options the coaching staff is far from worried about the position being a weakness, as long as someone steps forward as the starter in August. Furthermore, tight end Jacob Pedersen and wide-out Jared Abbrederis will be two very reliable targets assisting whoever is under center.

Maybe most worrisome, is the depth at offensive line. With Travis Frederick opting to leave school early to play for the Dallas Cowboys and only one senior projected to start, three juniors and one red shirt freshmen, Dan Voltz, will have to step up and overcome their inexperience. The second unit is even younger, so if a guard or tackle goes down early in the season, look for pass rushers to take advantage of it.

Dave Aranda is getting his first crack at a defensive coordinator job and will be implementing the rare base 3-4 scheme (Wisconsin had a 4-3 scheme under Bielema’s staff) which puts a lot of pressure on opposing QBs. The good news for the Wisconsin defense is their front seven implementing Aranda’s system will be very experienced as only one member of the 2012 unit won’t be back – they even have a number of reserves returning at both defensive lineman and linebacker. Keep your eyes on senior middle linebacker Chris Borland who will be an important defensive leader involved in almost every play. Meanwhile the line will be led by senior nose tackle Beau Allen. If you’re looking for an up-and-coming player on the Badger defense, then redshirt freshman and top 2012 recruit Vince Biegel is your guy after the outside linebacker made a number of sacks with the first team during the spring game. Teams will surely have a tough time running the ball against this crew.

Don’t be surprised if teams throw the ball a lot against Wisconsin, especially early in the year, as their secondary is consistently labeled the weakest unit. With brand new starters and a history for struggling to grab turnovers, the secondary will surely be a focal point during camp as the Andersen and his squad prepare to face a number of pass-heavy teams. Senior Dezmen Southware could put up some decent numbers at strong safety, but new corners Penis Jean and Darius Hillary, will need to prove they can handle the starting jobs. Still, the Wisconsin defense will still be strong, especially considering they only allowed 19 points per game last year (17th in the nation).

After Kyle French missed numerous field goals in the 2012 campaign, including a key one at the end of their Penn St. game, the Badgers hope to turn things around this year. Whether French wins the job again as a redshirt junior, or sophomore Jack Russell gets the nod, the place kicker is sure to have a short leash with Wisconsin fans. Heck, some analysts say they wouldn’t be surprised if third string kicker Stephen Salata sees some action this year following only a 55% field goal success rate last season.

Don’t be surprised if Gordon or Abbrederis return a kick or punt for a touchdown or two this season as both have tremendous speed and skills when given a little space. And while Drew Mayer’s punting game is expected to be fairly average once again, new special teams coach Jeff Genyk has had weak kick and punt return units in the past, most recently ranking 122nd and 83rd respectively in 2012. Overall, the Badger’s special teams unit is nothing special or abysmal, but I expect them to decide a couple close games this year, possibly including their matchup against the Wildcats.

Ultimately, Wisconsin’s relatively easy schedule will be their biggest asset, especially as they implement the new coaches’ systems. And with so many returning players, I expect Andersen’s Wisconsin squad to go 10-2 during their 2013 campaign. They will lose in early October on the road to Ohio St. and will also be upset in the Arizona St. road game. For several years the Badgers have struggled on the road, especially against top 25 teams. In fact, during Bielema’s tenure with Wisconsin, he won just one game on the road against a top 25 opponent (at Iowa in 2010). So yes that’s right, at this juncture, I expect Wisconsin to safely beat the Wildcats on October 12th – in fact, I think they’ll go undefeated at home with their loud fan base behind them.  Will Wisconsin reach the Rose Bowl though for a fourth-consecutive year and finally pull out a victory? No. Unfortunately for Wisconsin’s sake, Ohio St. is just too good and there are still numerous unanswered questions the Badgers have yet to answer from quarterback and offensive line to the secondary and the new coaching staff.