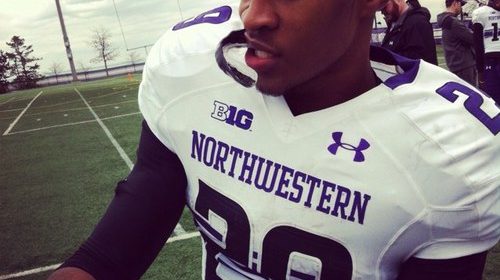 WNUR Sports’s Kevin Harris (@KevinGoesCats) takes a look at redshirt freshman running back Stephen Buckley and explains why this new face won’t be unfamiliar to ‘Cats fans for long. Most Wildcat fans have never heard of running back Stephen Buckley. That’s because he’s near the bottom of a very deep and talented depth chart (arguably the best overall running back core in the Big Ten) that includes NU’s 2012 offensive MVP Venric Mark as well as proven senior Mike Trumpy. Fans haven’t even had a chance to see Buckley in action after he redshirted last season and spent the year on the bench. But that should change this year as Buckley is eligible and expected to see the field in a number of capacities.

After playing quarterback throughout high school (a mobile one however), Buckley chose to attend Northwestern over a number of other schools including Washington State, Navy, and Kansas State. As a high school senior, the two-star recruit rushed for 1,352 yards and 25 touchdowns while throwing for 923 yards and eight touchdowns. “If his hands and route running skills can be developed this guy now becomes a multiple threat and headache for defensive coordinators,” ESPN wrote in their recruiting report. The 6-foot, 170 pound two-star recruit, made the most of his redshirt season, earning offensive “Practice Player of the Week” honors on three occasions (prior to the Syracuse, Minnesota, and Nebraska games). In addition to running a 4.48 40, he proved on the practice field to be both elusive and versatile.

Coach Pat Fitzgerald took notice of Buckley, as well as fellow redshirt freshman running back Malin Jones, during spring practices. “Both guys are very explosive and can run,” Fitz told the media following an open practice at Lakeside Field. “Both men catch the ball very well out of the backfield. They are both picking the system up very well. It’s not only things that will help us in the backfield but I think they will really help us in the kicking game.”

Despite the already crowded backfield, Buckley figures to be a part of the Wildcat’s offensive game plan as early as this season due to his unique skill set. Many analysts think his athleticism will best be utilized when he lines up in the slot because of his experience as a running quarterback. He could fill a similar role Kain Colter did last season when he wasn’t under center, playing key roles in everything from slip screens and tosses to flea-flickers and jump-passes. While it still remains to be seen how exactly Mike McCall will take advantage of Buckley’s deceptive speed, I think we can expect a couple large gain plays out of Buckley this season as he can be dangerous and tough to bring down if given the ball in space.

However Buckley will have to earn his playing time and prove he can handle college defenses. It remains to be seen if he can handle running between the tackles and if he’s put on enough muscle over the past year to handle the beating of enormous linebackers and defensive tackles. Luckily his redshirt season is expected to have helped him settle into the Wildcats offense and familiarize himself with the college playbook. Let’s hope the coaches have also used the time to find a way to take advantage of Buckley’s immense talent, as he has the potential to be a big playmaker (whether it’s via running or receiving) for the Wildcats.