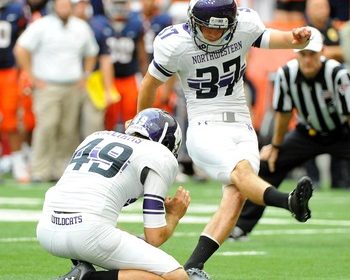 One improvement that goes under the radar is the success of Special Teams. Field position is king in football, and thanks to Special Teams, the ‘Cats constantly found themselves on its good side in 2012.

Venric fans, beware. Mark’s production trailed off at the end of the season, as teams angled kicks away from him. Mark’s name is out there and opposing coaches have him on their radar. Another factor that could inhibit his production are his injuries. Mark missed time multiple games in 2012 for return-related injuries. Coach Fitzgerald may put Tony Jones or another return man in on kickoffs to keep Mark fresh for the rushing game.

This does not mean NU is going to lose more games. Teams are going to make conservative decisions on Special Teams. This will likely help field position when teams punt out of bounds or squib kicks.

Mark could also try to return everything, despite the short kicks and angled kicks that will come his way. He still may put up Tyrann Matheiu/Ted Ginn-like numbers and earn himself an NFL Draft spot. He’s that good.

On the other side, NU strived on its own kickoff and punts in 2012. Steve Flaherty did not get a lot of love, but the kickoff specialist kicked for an average of 59.7 yards in his senior season. He also recorded 16 touchbacks, up from the six he had in 2011. The punting was not great, but it got the job done. Brandon Williams punted for an average of 39.9 yards with a net 37.6 average, not to mention he pinned 21 punts inside the opposing 20-yard line.

Williams should pick up right where he left off, but Flaherty is gone. The question is whether or not freshman Hunter Niswander will be able to step in for Flaherty. Rumor has it, the teen wears a cannon for a foot (ranked number 12 place-kicking prospect by Scout.com in his class), but he has no college experience to show for it. Jeff Budzien could step in to take kickoffs if Niswander does not perform. For right now, the kickoff game is unpredictable.

And with that Budzien reference two sentences ago, we get to everyone’s favorite kicker/Big Ten Media Day satirist. Budzien had an ugly 2011 season, knocking in only six of ten field goal tries. He was two of five from 40+, and in the second half of the season, Fitzgerald went for nearly every fourth down on the cusp of field goal range.

The 2012 Budzien was a Lou Groza Award semifinalist and the first Northwestern kicker since 1997 to be named first-team All-Big Ten by the coaches. Budzien was 19-20 on field goals, including a 6-6 completion from 40-49 yards. His 95 percent conversion rate was third in the nation. He only missed one kick: a 53-yard field goal with 1:10 remaining against Nebraska that went wide right. The rose pedals tailed off just at the end…but we digress.

Budzien is 101-101 on extra points as a Wildcat and proved in 2012 he has the foot for long kicks. Budzien is primed for more action in 2013, with NU maybe calling his number for longer field goals. ‘Cats fans should not expect another 95 percent season, but deeper place-kicking ability can give Northwestern another tool to work with.

Speaking of which, do not rule out 60-yard attempts from Niswander here and there. Again, we will not know his skills until we see them.

It is not going to get a lot of praise, but the Wildcats’ special teams is a top-notch card Big Ten coaches fear. There are many expectations to live up to from 2012, but if the ‘Cats can at least sniff them, it will go a long way toward winning 10 games in consecutive seasons.