Posted on August 7, 2013 by Eric Klaus Leave a comment 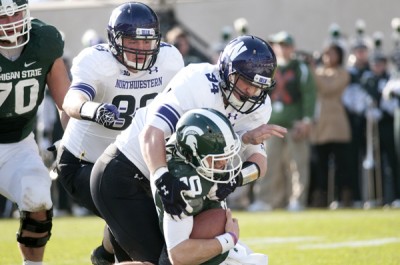 WNUR’s Eric Klaus explains how sophomore defensive end Dean Lowry can make a big impact for the Wildcats in 2013.

Throughout Pat Fitzgerald’s tenure at Northwestern, true freshman have rarely seen the field during their first year on campus. However, a year ago, Dean Lowry proved to be the exception to the rule, as the 6’6” true freshman was immediately inserted into the defensive line rotation. Playing primarily as a change-of-pace defensive end behind starters Tyler Scott and Quentin Williams, Lowry thrived, making several impact plays in limited snaps. With the graduation of Williams, Lowry will have the chance to play a lot more in 2013. This increase in playing time, coupled with the completion of his first full offseason of workouts and his successful rookie season, make Lowry a potential breakout defensive star for the ‘Cats in 2013.

A 3-star recruit from Rockford, Illinois, Lowry entered Northwestern with less hype than fellow defensive linemen Ifeadi Odenigbo and Greg Kuhar. In spite of this, Lowry ended up being the only one of the three to contribute last season, as he managed to make a very strong impression on the Northwestern coaching staff. He impressed so much so, in fact, that he was one of only two true freshmen (along with SB Dan Vitale) on Northwestern’s depth chart at the start of last season. All in all, Lowry wound up playing in all of the ‘Cats 13 games in 2012, recording 14 tackles (3 for loss), 6 QB hurries, a sack and a fumble recovery. His best game came in Week 2 against Vanderbilt where he picked up two tackles, a QB hurry, a pass breakup and a key fumble recovery, which came late in the 4th quarter when Northwestern was trying to maintain a 16-13 lead. Lowry also came up big in games against Penn State, Nebraska, and Michigan State, recording his first career sack in the latter. If Lowry can build off his productive freshman year and continue to grow as a player, stat lines like the one he put up against Vanderbilt may become a regular occurrence.

After building on his strong performance from last season by looking good in spring practices, Lowry is one of the favorites to take over the starting defensive end spot opposite Tyler Scott. His primary challenger for the spot will be redshirt sophomore Deonte Gibson (2 sacks in 2012), although Ifeadi Odenigbo could also prove to be a strong candidate for the job as well. At this point, Lowry is probably the slight favorite for the job because he is the most well-rounded of the three, as he has shown the ability to defend both the run and pass effectively.

The likeliest scenario, at least going into training camp, would appear to be Lowry starting and playing on 1st and 2nd down (and other potential running scenarios) with Gibson and/or Odenigbo replacing him on third down (and other passing situations) where their strong pass-rushing abilities can be best utilized. Regardless, Lowry is likely to see more playing time than he did a year ago, meaning he will have the opportunity to make a much bigger impact than he did a year ago. If he ends up as the starter, he should have plenty of chances to make plays in the backfield as defenses will likely pay more attention to Scott, the reigning Big Ten sack champion. Therefore, if Lowry puts it all together and wins the starting job, it would not be surprising to see him match or even exceed Quentin Williams’ 2012 production, given his talent level. As a result, Lowry appears to be a prime breakout candidate for the ‘Cats in 2013.