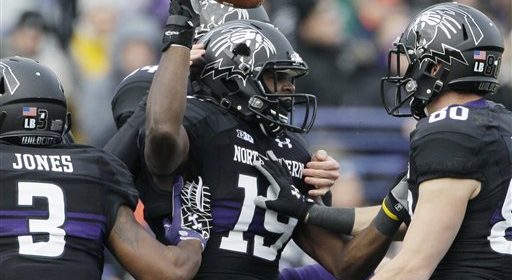 It was no secret that Northwestern favored their running game last year. Why wouldn’t they? Between having an All-American in the backfield and having the lead for much of last season, they never had to bring it through the air. Even with that being said, three of last year’s starters are coming back (Christian Jones, Tony Jones and Rashad Lawrence) and Kyle Prater looks ready to show why he went to USC in the first place.

But the receiver that should have a lot of eyes on him in Evanston and the Big Ten will be redshirt-sophomore Cameron Dickerson.

With so much coming back, Dickerson will for sure be a back on the spread offense that Northwestern employs. But don’t let that fool you, the man is a work horse. In redshirt season, he won practice player of the week three times and, in his limited action last season, he had an unstoppable motor on special teams. Not to mention, his only career touchdown catch would have been included in NU play of the year talks had they hung on to beat Michigan.

Given Northwestern’s fast-paced offense and their preference to have 3 or 4 receivers on the field at a time, having superior depth is a must. Dickerson is a big body (6’3, 200) who runs great routes and has a nose for the ball. Though he only has 9 catches for 54 yards in his career, that is more a testament to the wealth of talent at wide receiver and NU’s commitment to running the ball than it is to Cam himself.

Speaking of Dickerson and that running game, much of his time on the field last year involved him doing outside blocking that made this former offensive lineman proud. He frequently gets himself in proper position and, unlike many receivers in the game of football, does not simply stand on the outside looking in when a play (pass or run) is not coming in his direction. His stellar run blocking is sure to improve this season and get him on the field, and his motor and play-making ability will keep him there.

But what will really help Dickerson succeed this year for Northwestern is his personality. Yes, personality gets you places. Not a single player or coach has a negative thing to say about him. From his work ethic that is exceptional, to how much he enjoys being on the field, the entire program loves this kid. That’s good enough to just get him on the field.

Then when he gets on the field, he knows he has plenty to prove. From knowing him personally, I know that Dickerson wants to be a standout in this core and on this team and eventually earn himself a starting position before his days in Evanston come to a close. In a core that is simply loaded with talent, Cameron Dickerson will without a doubt make a huge impact. And this year, his statistics should tell the story of just how talented he is.