Posted on September 7, 2013 by Jim Sannes Leave a comment 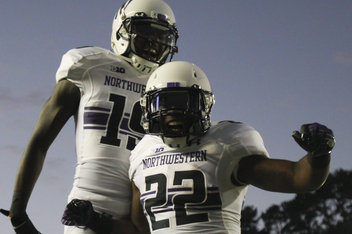 WNUR’s Jim Sannes (@JimSannes) gives some things to keep an eye on during today’s contest between the Northwestern Wildcats and the Syracuse Orange.

We’re at about two hours before game time, and I’ve already seen a man trying to hurdle a six-foot fence to get to a grungy port-a-potty, disregarding the open gate three feet to his right. At this point, nothing will surprise me today. Here are a few things to keep an eye on:

1. The health of Kain Colter and Venric Mark.

Colter practiced in full in practice on Wednesday, a non-contact day for the team, and was listed as questionable on Friday’s injury report. It’s looking like he will play, but, either way, expect a heavy dose of Trevor Siemian. In their loss to Penn State, the Orange allowed 296 yards through the air on 9.3 yards per attempt, more than two yards more per attempt than Northwestern allowed to Cal. Both defenses were facing true freshmen starters, so we’ll have to see what they can do to recover today.

Considering the team rolled out three new starters on the line last week, allowing only one sack and averaging 5.2 yards per carry isn’t too shabby. Returning starters Jack Konopka and Brandon Vitabile both had outstanding games, but the key here is what the newbies Geoff Mogus, Ian Park and Paul Jorgensen can do. Week 1 went well against a mediocre defense, but Syracuse held the Nittany Lions to just 57 yards rushing last week. This is the unit I am most interested in today.

This one’s too obvious, but it’s true. If anybody needs a big game, it’s White after the season-ending injury to Daniel Jones. Some info on White:

The ‘Cats recorded four sacks last week, one each by their top four defensive ends: Tyler Scott, Dean Lowry, Deonte Gibson and Ifeadi Odenigbo. We knew this was going to be a strength of the ‘Cats heading into the season, and the Cal game more than confirmed that. Even more importantly were the deflected passes (one for Scott, and one for Lowry leading to one of Collin Ellis’s interceptions). The ‘Cats d-line totaled 14 deflected passes last year (five of which were by Scott).

The clouds to the north of the stadium are a similar hue to that of Lake Michigan, which is no bueno in techincal terms. The radar looks like it may drift east, but any precipitation may force both teams to rely more heavily on the ground game than the air attack.