Posted on September 9, 2013 by Jim Sannes Leave a comment 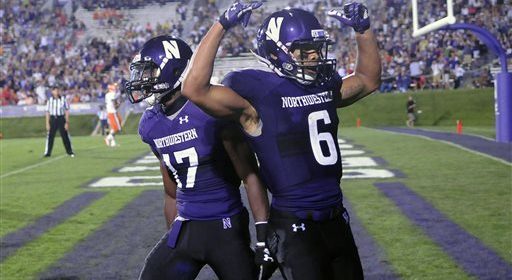 WNUR’s Jim Sannes (@JimSannes) takes a look at the numbers behind Northwestern’s 48-27 victory over Syracuse Saturday with notes on Tony Jones, Jeff Budzien and Trevor Siemian. Before the season opener, we heard a lot about the “Bear Raid” offense under Sunny Dykes. Me thinks Northwestern was taking notes. Saturday, in their 48-27 victory over Syracuse, Trevor Siemian and Kain Colter dropped the okie doke on the Orange defense to the tune of 375 yards passing. This game had me, your stereotypical stats nerd, cursing my pocket protector for delaying my trip to the calculator to see just how ill the Northwestern offense was. Let’s take a look, with a few notes from the defense (just to keep Fitz happy):

Yeah, yeah, yeah, gripe about “Prose Bowl” and not listing percents larger than 100. I GET IT. That doesn’t change the fact that Jones went dumb/stupid/ign’nt/whatever the kids are calling it these days. Jones had set his career high in receptions at five and yards at 70 the previous week, only to shatter them both with nine for 185 against ‘Cuse. Jones eclipsed those 70 yards about 20 minutes into the game. Jones already has 72 percent of the 335 receiving yards he had last year. WHO GON STOP HIM, HUUUUUH??

This was the first 100-yard game for a Northwestern receiver since November 12, 2011, when Jeremy Ebert whispered sweet-nothings to the Rice defense on his way to 208 yards (more on that game later). The ‘Cats already have more 100-yard receiving games this year (2) than they did last year (1). Dan Vitale had 101 yards against Cal, and his 110-yard breakout against Michigan State was the only such performance for the offense last year. Clearly, this means they will double their win total and finish 20-0.

202: Career points for Jeff Budzien in a Northwestern uniform.

This is enough to put Budzien sixth all time in the Wildcats record books as he passed John Duvic on Saturday. Budzien also booted his 112th consecutive successful PAT attempt. That is more extra points than Ichiro has home runs (111), Joe Flacco has touchdown passes (104), and Jay-Z has problems (99). This is enough consecutive successful attempts to put Budzien third in Big Ten history, only 14 behind J.D. Carlson for the most all-time in the conference. Just give this man the Groza, the Heisman, the Stanley Cup, the Oval Office, the Golden Spatula, whatever he wants.

Let’s give this number some perspective. Against the ‘Cats in Week One, Cal quarterback Jared Goff attempted 63 passes. If Siemian had attempted that many passes with this many yards per attempt, he would have had 702.45 yards. He don’t currrr about yo feelings, Syracuse. Over 13 games, that’s 9,131.85 yards, so, yes, the man can throw a football. Siemian’s 259 yards were his third most all-time, following last week’s 276 yards and 308 yards against Indiana last year.

Overall, the 375 passing yards were the most for the ‘Cats since, yup, that same Rice game in November of 2011. Rice and Orange are foods… not pass defenses. Colter had his share of success through the air, as well, completing each of his first eight passes. He finished 15-18 for 116 yards and a touchdown. I don’t know how to calculate ESPN’s “QBR” stat, but Siemian was rated at 98.4 with Colter at 88.5 The average is 50 with the max at 100. They had a good game.

9: Saturday was the ninth time the ‘Cats had topped 200 yards rushing in the last 13 games.

On its face, this is a good number. When you add in that the team was without it’s All-Big Ten running back for a majority of the first game this year and the entirety of the second, it becomes utterly impressive.

Did the running game struggle most of the night? Yes. But then Kain Colter went all Kain Colter on the Orange. If anyone has ever questioned the value of Colter to the Northwestern offense, think of this: Colter carried the ball five times on third down. On those five carries, he picked up 68 yards, including rushes of 33 and 16 on the same drive to put the ‘Cats on top 27-7. Colter last year on third down had 50 carries for 267 yards and six touchdowns. Northwestern finished 10-18 on third down conversions and is converting more than 50 percent on the year. That’ll work.

16: Over their last five games, the Northwestern defense has recorded 16 interceptions.

I would contend that all defensive line interceptions should count as double, but peeps be hating on the big fellas. Dean Lowry doing his best Quentin Williams impression was certainly one of the high points of Saturday’s game from the Northwestern standpoint. This was the second time in the last three games that Northwestern has had one member from each level of the defense record a pick (the other being the Gator Bowl where Williams of the defensive line, Chi Chi Ariguzo of the linebackers and the duo of Ibraheim Campbell and Nick VanHoose in the secondary).

Overall this year, the ‘Cats have seven interceptions. Last year, they did not record their seventh pick of the year until the final game of the season against Illinois. After the second week of the season, Northwestern is tied with Tennessee for the national lead in interceptions, although Tennessee’s opponents have been perennial powerhouses Austin Peay and Western Kentucky. Y’all don’t mess with the Governors and Hilltoppers.