Posted on October 8, 2013 by WNUR Sports Leave a comment 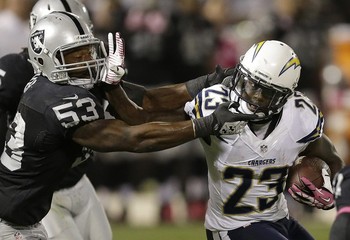 Northwestern has seven football alumni currently on NFL active rosters. Here’s how they did this week in the NFL:

Zach Strief, Offensive Tackle, New Orleans Saints (Class of 2006): Started at right tackle in a win over the Chicago Bears.

Nick Roach. Roach had 12 tackles (two solo), and one tackle for a loss in the Raiders 27-17 win over the San Diego Chargers Sunday night. Roach now has 36 total tackles in his first season with the Raiders after playing six seasons for the Bears.