Maroney and Barber: The Best College Running Back Duo of the 21st Century? 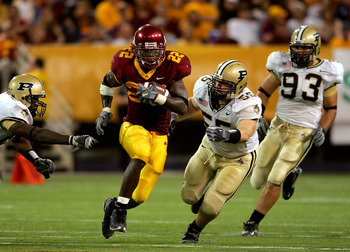 WNUR’s Michael Stern (michaeljstern23) digs back into the vault to look at the Minnesota Golden Gophers’ running back duo of Laurence Maroney and Marion Barber III, possibly one of the greatest backfield duos of the 21st century. Not much has gone right in the 21st century for Minnesota’s football team. The program is 11 games under .500 since the turn of the century, and has a 3-6 record in bowl games.

However, the Gophers might boast the best running back duo in the country since Y2K. That’s right. Marion Barber III and Laurence Maroney were Minnesota Golden Gophers at the same time.

The next season was not much different. Maroney ran for 1,348 yards while Barber rushed for 1,269, and the Gophers beat the Wildcats 43-17 in week 4. Maroney more than made up for his poor performance in 2003 as he ran for 145 yards and a touchdown, while Barber ran for 86 yards and threw a 21-yard touchdown.

That’s a two-season total of 4,934 yards for the two running backs. Maroney went on to play four seasons for the New England Patriots and rushed for 2,430 yards behind Tom Brady. Barber played six years for the Dallas Cowboys and one for the Chicago Bears, rushing for 4,780 yards and being named to the 2007 Pro Bowl.

Which tandems provide Maroney and Barber competition for the title of best 21st century collegiate running back duo? Only two other pairs have rushed for over 1,000 yards in consecutive seasons since 2000: West Virginia’s Pat White and Steve Slaton and Arkansas’ Darren McFadden and Felix Jones.

Based solely on their collegiate stats, Slaton and White blow Barber and Maroney out of the water, as the Mountaineers ran for 5,349 yards in 2006 and 2007. The problem? Both Mountaineers found little success in the NFL. White is currently on the Washington Redskins’ roster and has never completed an NFL pass, while Slaton rushed for 1,896 yards in four seasons with the Houston Texans and Miami Dolphins.

Maroney and Barber’s stiffest competition comes from McFadden and Jones. This duo ran for 5,807 yards in 2006 and 2007. McFadden has rushed for 3,549 yards with the Raiders, while Jones has rushed for 2,802 with the Cowboys, Eagles, and Steelers. (Peyton Hillis also played fullback for these Arkansas teams, but that’s another story for another time.)

The final verdict: To get the best running-back duo of the 21st century, add the tandem’s college rushing yards (from the two 1,000 yard seasons) to their NFL rushing yards.

Such a close race, but the Razorback duo prevailed by a mere 14 yards, hopefully much closer than Saturday’s game.